How are lipids and protein complexes segregated during cell polarization?

In polarized epithelial cells, the apical membrane is rich in PIP2 and houses the PAR and Crumbs polarity complexes while the basal membrane contains PIP3 and the Scribble polarity complex [1][2]. The phosphatase PTEN, which is recruited by tight junction proteins such as Magi 1-3, stabilizes PIP2 distribution at the apical membrane by reversing PI3K-mediated phosphorylation of PIP2 to PIP3 [3]. This is essential for maintaining cell polarity, as studies involving the addition of exogenous PIP3 to the apical surface of polarized cells resulted in a quick inversion of polarity [1]. PAR3 also contributes to the maintenance of phosphoinositide distribution at the apical membrane by binding simultaneously to both PIP3 and PTEN via its PDZ2 and PDZ3 domains, respectively. This results in PIP3 being trapped in the apical domain, followed by its instant hydrolysis to PIP2 by PTEN [4]. Additionally, the ‘fence’ function of the tight junctions also helps in restricting PIP2 and PIP3 to distinct membrane domains by preventing the free diffusion of PTEN and PI3K between the apical and basolateral membranes [5]. 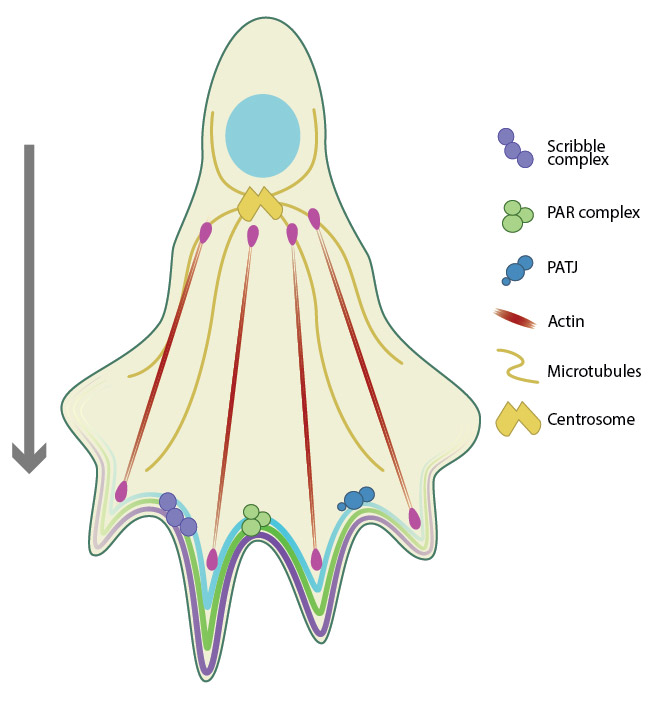 Migratory polarity establishes a front-rear polarity in the direction of movement. Cdc42 is a key regulator of cell migration, and recruits Scribble, PAR and PATJ complexes to the leading edge (front) of the migrating cell. The actin and microtubule machinery also function to establish migratory polarity.

The three main protein complexes defining cellular polarity, namely the Scribble (Scrib/Dlg/Lgl), Crumbs (Crb/Pals1/PatJ), and PAR (Par3/Par6]/a-PKC) polarity complexes interact with each other as well as with a number of cytoskeleton-associated proteins to regulate cellular polarity [6]. While the PAR and the Crumbs complexes are restricted at the apical surface, Scribble complex is localized to the basolateral domain and the three complexes interact in a cooperative and/or antagonistic manner to fine-tune localized signals. The polarity complexes take their localization cue from the adherens junctions and tight junctions. For instance, Par3 localizes to the tight junctions by binding to the junctional adhesion molecules (JAMs) via its PDZ1 domain [7][8], while local Cdc42 and Rac activation at the AJs serve to recruit a-PKC to the apical surfaces [9].