Telomeres are short nucleotide sequences found at the end of linear chromosomes which protect the genetic information. In vertebrates, telomeres have the hexameric sequence TTAGGG.

During DNA replication, the double stranded DNA is unwound and DNA polymerase synthesizes new strands. However, as DNA polymerase moves in a unidirectional manner (from 5’ to 3’), only the leading strand can be replicated continuously. In the case of the lagging strand, DNA replication is discontinuous. In humans small RNA primers attach to the lagging strand DNA, and the DNA is synthesized in small stretches of about 100-200 nucleotides, which are termed Okazaki fragments [1][2]. The RNA primers are removed, replaced with DNA and the Okazaki fragments ligated together. At the end of the lagging strand, it is impossible to attach an RNA primer, meaning that there will be a small amount of DNA lost each time the cell divides. This ‘end replication problem’ has serious consequences for the cell as it means the DNA sequence cannot be replicated correctly, with the loss of genetic information.

In order to prevent this, telomeres are repeated hundreds to thousands of times at the end of the chromosomes. Each time cell division occurs, a small section of telomeric sequences are lost to the end replication problem, thereby protecting the genetic information. At some point, the telomeres become critically short. This attrition leads to cell senescence, where the cell is unable to divide, or apoptotic cell death. Telomeres are the basis for the Hayflick limit, the number of times a cell is able to divide before reaching senescence [3]. 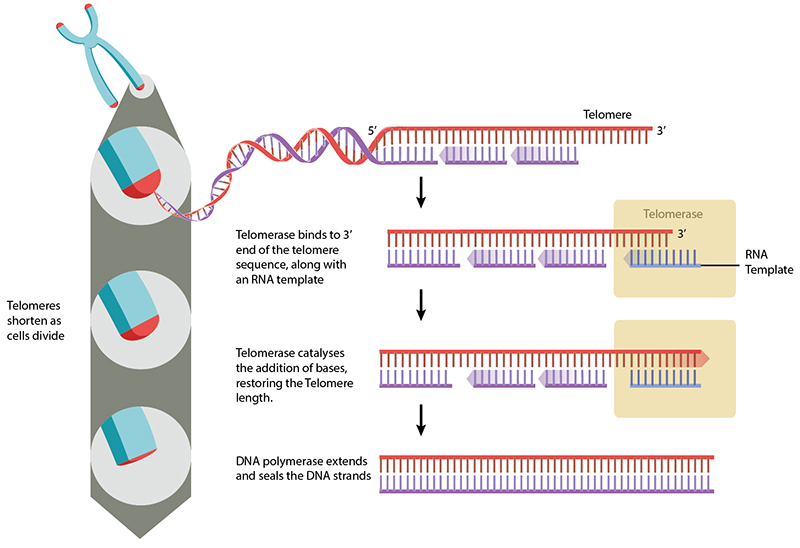 Telomeres are located at the end of chromosomes, where they help protect against loss of DNA during replication.

Telomeres can be restored by the enzyme telomerase, which extends telomeres length. Telomerase activity is found in cells that undergo regular division, such as stem cells and lymphocyte cells of the immune system. Telomeres can also be extended through the Alternative Lengthening of Telomeres (ALT) pathway. In this case, rather than being extended, telomeres are switched between chromosomes by homologous recombination. As a result of the telomere swap, one set of daughter cells will have shorter telomeres, and the other set will have longer telomeres. While still not fully understood, the ALT pathway is reviewed in [4].

A downside to telomere extension is the potential for uncontrolled cell division and cancer. Abnormally high telomerase activity has been found in the majority [5][6] of cancer cells, and non-telomerase tumours often exhibit ALT pathway activation. As well as the potential for losing genetic information, cells with short telomeres are at a high risk for improper chromosome recombination, which can lead to genetic instability and aneuploidy (an abnormal number of chromosomes).

Cellular geometry plays an important role in nuclear architecture and chromosome dynamics, including telomeres [7]. Recent work has shown that mechanical forces can regulate pathways involved in maintenance of genome integrity. ATR is a nuclear protein which can sense DNA damage. Upon osmotic stress or mechanical stretching, ATR relocalises to the nuclear membrane, suggesting that ATR is mechanosensitive, and this property helps it protect the DNA from mechanical stresses [8]. Furthermore, stretching of the telomere tetraplex structure by magnetic tweezers has shown that it exists in three distinct, folded states that have different lifetimes and mechanical stability [9]. These findings suggest that mechanical forces influence the role of telomeres in protecting the genome and in tumourgenesis [10].