What are two component regulatory systems?

Bacteria respond to changing environments by altering gene expression. Two-component regulatory systems (TCRS) are important mediators of signal transduction that enable bacteria to detect physical and/or chemical changes and then relay this signal through the cytoplasm to the bacterial nucleoid, where modulation of gene expression occurs. 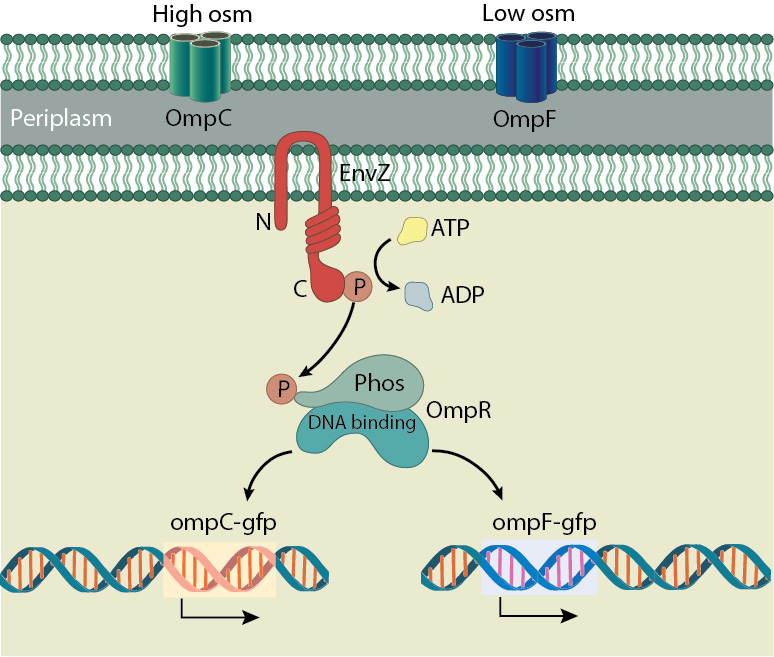 EnvZ is a histidine kinase that senses changes in medium osmolarity and signals its response regulator OmpR to bind to OmpF and OmpC porin promoters to differentially modulate their transcription. 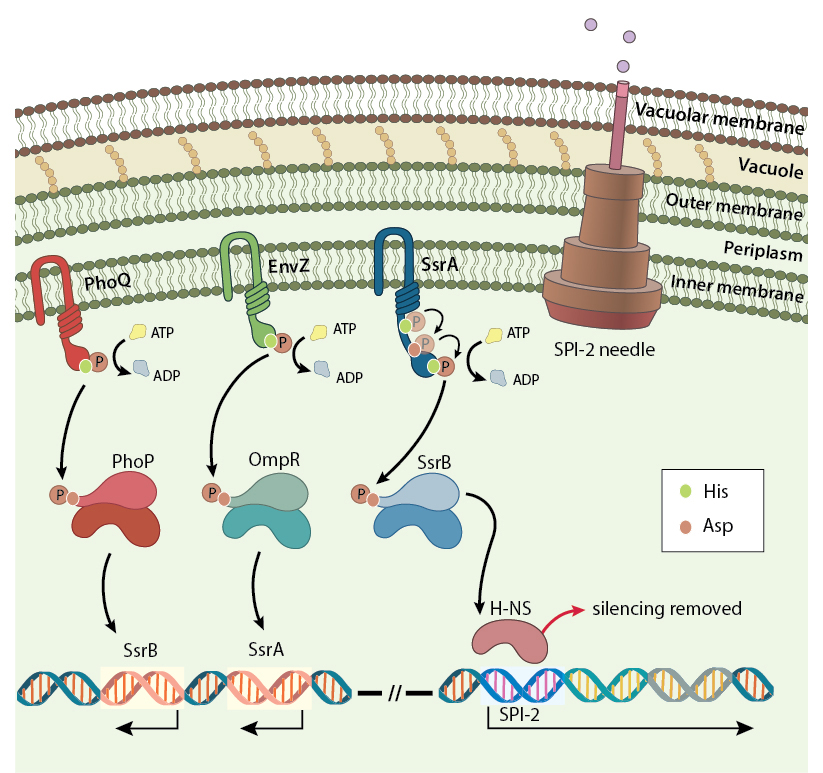 The two component TCRS SsrA-SsrB in Salmonella contributes to virulence by de-repressing the H-NS mediated silencing of SPI-2 genes. Both PhoQ/PhoP and EnvZ/OmpR regulate SsrA-SsrB. The underlying mechanism of regulation of SPI-2 by SsrA/SSrB is the phopho-relay between the sensor kinase, SsrA, and the response regulator, SsrB. SsrA is a tri-partite sensor kinase that is likely phosporylated at His405, followed by transfer of the phosphoryl group intramolecularly between Asp739 and His867. The phosphoryl group is finally transferred to Asp56 in the N-terminus of SsrB. Phosphorylated SsrB relieves the repression of SPI-2 genes by H-NS.

While many two-component systems control basic cellular processes such as motility, nutrient uptake and cell division, bacterial pathogens use two-component systems to control virulence. A prominent example is the gram-negative pathogen Salmonella Typhimurium, which is a frequent cause of bacterial gastroenteritis. After ingestion of contaminated food, Salmonella can travel to the lower intestinal tract where it crosses the intestinal epithelium and is engulfed by resident macrophages. The low acidity and low osmolality of the macrophage vacuolar environment serves as an activating signal for various two-component systems, including: EnvZ/OmpR, PhoP/PhoQ, SsrA/SsrB, which enables the pathogen to survive inside host cells. The PhoP/PhoQ TCRS responds to changes in the level of cations like Ca2+ and Mg2+, whereas EnvZ-OmpR, the master regulator, responds to changes in the acidic environment of the macrophage [2]. Both PhoQ/PhoP [3] and EnvZ/OmpR [4], [5] regulate SsrA/SsrB which eventually regulates SPI-2 expression and secretion of effectors (Figure 2).

In particular, the SsrA sensor kinase is activated by low pH and phosphorylates the response regulator SsrB. Phosphorylated SsrB de-represses H-NS silencing and activates a set of virulence genes located at the Salmonella Pathogenicity island-2 (SPI-2) region [6], [7]. These genes encode various components of a molecular syringe (Type-III secretion system) which allows the delivery of ~30 specialized effector proteins that manipulate the host cellular machinery to ensure the survival and proliferation of intracellular Salmonella.