Host (human) septins play a role in bacterial pathogenesis [1] and in host defense mechanisms, mainly, autophagy [2]. Although actin is the most commonly exploited cytoskeletal protein by many bacterial pathogens, septins, which are unique cytoskeletal components, are also found to co-localize with actin at sites of infection. The exact role of septins at these sites are not clear, but it is likely that septins may act as a scaffold for the recruitment and assembly of other proteins involved in infection, or provide additional rigidity to the actin structures triggered by the bacterial pathogens. Host septins also play a role in fungal infections, mainly in the uptake of Candida albicans through endocytosis by endothelial cells in an actin and N-cadherin dependent manner [3]. In some pathogenic fungi like Candida albicans, Ustilago maydis and Aspergillus nidulans, septins of fungal origin, are required for their virulence {reviewed in [4]}. The role of fungal septins in infection is likely related to their function in maintaining proper cell morphology and polarity during hyphal growth. Research on the role of septins in infection is also providing novel insights into cytoskeleton dynamics that underlie fundamental cellular processes like membrane trafficking, autophagy and mitochondrial dynamics. 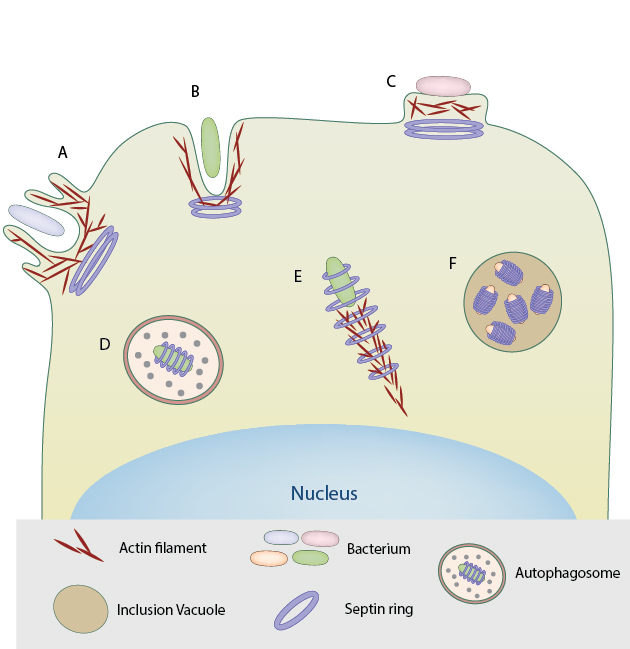 Septin rings assemble at the base of macropinosome-like structures induced by triggering bacteria for entry into host cell. B. Septin assembly at the site of zipper mode of entry into host cell by bacterial pathogens such as S. flexneri and L.monocytogenes. C . Septin rings at the site of actin pedestals induced by extracellular pathogens like EPEC. D. In the case of S.flexneri, the septin rings form cage-like structures around the bacteria that are recognized by the host immune system and targeted for autophagy. E. Septin rings form around actin comet tails of bacteria such as S.flexneri, restricting their motility and proliferation. F. Septins are required for the formation and extrusion of inclusion vacuoles by Chlamydia trachomatis essential for their replication and propagation within the host.

Role of septins in bacterial attachment to host cell

Phosphorylated Septin-9 (SEP9) is required for the attachment and virulence of Enteropathogenic E.Coli (EPEC) as siRNA knockdown of SEP9 and a phosphorylation-deficient SEP9 mutant impaired EPEC adherence to host cell and decreased EPEC mediated cell death [5]. It is speculated that SEP9 phosphorylation is coupled with actin dynamics at the actin pedestals induced by EPEC. Septins are also required for the adherence of another pathogen Clostridium difficile to the host cell [6]. The Clostridium difficile transferase (CDT) toxin depolymerizes actin and promotes the recruitment of septins 2, 6, 7 and 9 to the sites of bacterial adhesion via the small GTPase Cdc42 and its effector Borg (binder of Rho GTPases). Septins then directly bind the microtubule plus-end tracking protein EB1, stimulating the formation of microtubule-based protrusions from the host cell that wrap around the bacteria, causing the bacterium to attach tightly to the host cell {reviewed in [1]}.

Roles of septins in bacterial entry into host cell

Septins also play different roles during bacterial entry into host cells. Septins assemble into collar-like structures at the base of distinct membrane–cytoskeletal structures formed during zipper and trigger mode of bacterial entry through non-phagocytic cells as well as at the neck of the phagocytic cup of phagocytic cells [7], {reviewed in [1]}. SEP2 and SEP11 regulate the dynamics of the Met receptor at the cell surface and the underlying actin cytoskeleton and are required for InlB-Met mediated zipper mode of internalization of L.monocytogenes [8]. The role of septins during trigger mode of entry of pathogens is not limited to the formation of macropinosome-like structures that facilitate bacterial uptake, but also in membrane fusion events during macropinosome trafficking [9] [10].

Role of septins in the intracellular life of pathogens

Septins also associate with intracellular pathogens, for instance, septin complexes are recruited to the inclusion vacuoles in which the pathogen Chlamydia trachomatis replicates. Septins together with actin are required for the extrusion of newly replicated C. trachomatis from the inclusion vacuoles [11]. Septins rings assemble  around actin tails and  play a role in actin tail polymerization and motility of certain intracellular bacteria like Listeria monocytogenes, Shigella flexneri and Mycobacterium marinum [12]. However, the septins that assemble at actin tails may also play a beneficial role in host defense. In some cases, for instance in Shigella flexneri, the septins rings further form cage-like structures around the bacteria, restricting their motility and proliferation within the cytosol. These bacteria are then recognized by the host defense machinery and are targeted for autophagy. Mitochondria are found to associate closely with septin-caged bacteria and are required for the formation of septin cages and targeted autophagy of S.flexneri.  In fact, in order to escape autophagy and survive within the host cell, Shigella prevents the assembly of septin cages by fragmenting the associating mitochondria [13].