Skip to content
How are apoptotic cells removed from the epithelial tissue in Drosophila pupae?Sruthi Jagannathan2018-04-16T14:41:11+08:30

How are apoptotic cells removed from the epithelial tissue in Drosophila pupae?

These findings were published in Development in 2017.

Figure: The schematic depicts the basal extrusion of an apoptotic LEC during histoblast expansion in Drosophila pupae. The apoptotic cell undergoes apical constriction due to the contractile activity of an inner actomyosin cable formed in the cell. This is accompanied by the disassembly of adherens junctions between the apoptotic cell and the neighboring cells and the apoptotic cells is able to extrude basally. A reduction in junctional tension in the tissue triggers the purse-string like contractile activity of a supracellular actin cable that is formed connecting the neighboring cells. As a result, neighboring cells are pulled together to close the gap created by the extruding cell. 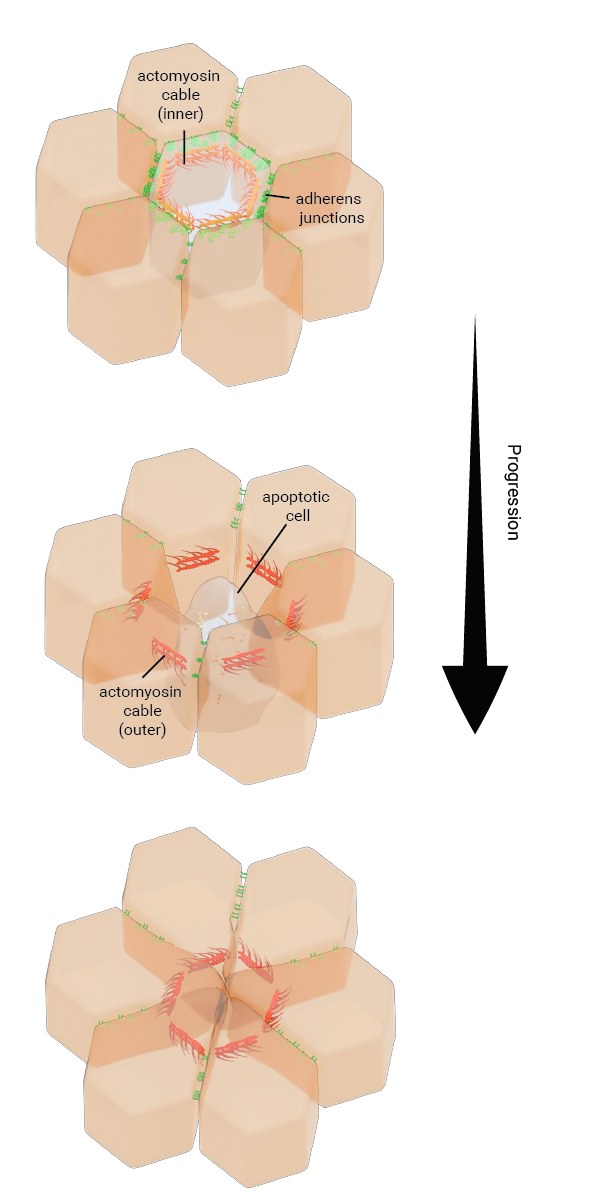 During histoblast expansion in Drosophila pupae, the old, apoptotic larval epidermal cells (LECs) are replaced by rapidly proliferating and migrating histoblasts lying adjacent to the LECs. The apoptotic LECs detach and extrude basally through a well-coordinated sequence of molecular events, accompanied by the modulation of tensional forces within the epithelial tissue. The cell extrusion process starts with the activation of caspase-3 activity in apoptotic LECs, which together with the formation of an actomyosin cable, initiates apical constriction in these cells. Following this, the adherens junctions at the interface of apoptotic LECs and non-apoptotic neighboring cells get remodeled and the levels of adherens junctions components such as E-cadherin decrease. As the adherens junctions give away and the apoptotic LECs extrude, there is a release of tension within the neighboring cellular interfaces, which triggers the assembly of a supracellular actomyosin cable that interconnects these cells. The purse-string like contractile mechanism of this supracellular actin cable pulls the neighboring cells together, which then form new intercellular connections and seal the gap created by the extruding LECs.

Adherens junctions (AJs) are cell-cell adhesion complexes that are continuously assembled and disassembled, allowing cells within a tissue to respond to forces, biochemical signals and structural changes in their micro environment. Adherens junctions regulate cell shape, maintain tissue integrity and translate actomyosin-generated forces throughout a tissue. A key component of adherens junctions are cadherins. The cadherin protein family are common cell-adhesion molecules (CAMs) that mediate cell-cell contacts at anchoring junctions (e.g. adherens junctions, desmosomes) and at prominent sites of cell-cell communication (e.g. neuronal synapses). There are over 100 different cadherin family members that are grouped into at least 6 subfamilies, including type I classical cadherins, type II atypical cadherins and desmosomal cadherins. Most cadherins adhere by homophilic interactions (i.e. they bind to the same type of cadherin) but certain types (e.g. E-cadherin) also adhere by heterophilic interactions (i.e. they bind other types of cadherin). The interactions can take place laterally on the same cell, called a cis interaction, or between two cells, called a trans interaction. Cadherins also bind the intracellular proteins p120-catenin and β-catenin, after which α-catenin is recruited by β-catenin. A vast network of adhesion receptors, scaffolding proteins, actin regulators and signaling proteins regulate the formation of this complex, via a complex network of interactions, which is currently being characterized and has been named the cadhesome.

Actomyosin refers to the actin-myosin complex that forms within the cytoskeleton. Actomyosin is inherently contractile, with the myosin motor protein able to pull on actin filaments. This property gives rise to contractile fibers that form the basis of skeletal muscle, and even in non-muscle cells, enable cell motility and force generation at the sub-cellular level. During non-muscle actomyosin contractility, non-muscle myosin II uses energy from ATP hydrolysis to slide the actin filament to produce contractile force, and these forces have been implicated in multiple cell functions, such as cell adhesion, establishing cell polarity, and cell migration. During cell division, actomyosin contractility regulates forces on the nucleus which affect DNA synthesis and chromatin organization, and is also required for formation and contraction of the mitotic spindle.

Cells and subcellular structures experience forces from a variety of sources. In general, forces are developed from within the cell via the cytoskeleton (endogenous forces) or come from outside the cell (applied forces). Forces exerted on the cell are often dynamic in nature, requiring the cell to constantly re-evaluate its status and adjust its internal and external morphology accordingly. Although the mechanosensors and mechanotransduction events occur locally at the cell periphery, the forces and biochemical signals are transmitted throughout the cell and are integrated over time. In general, they promote stiffening, softening, and reorientation of cytoskeletal filaments.

How is the cytoskeleton linked to adherens junctions?

What compositional differences exist between adherens junction and desmosomal complexes?

While the classical cadherins in adherens junctions (AJs) are bound to catenins such as β-catenin and p120 catenin which subsequently bind to the F-actin cytoskeletal network, desmosomal cadherins, bind to distinct cytoplasmic proteins such as plakoglobin (also known as γ-catenin) which in turn link to intermediate filaments. Read more..

What is the composition of the cytoplasmic plaque of adherens junctions?

All cell-cell adhesion complexes are composed of intercellular and cytoplasmic components. Intercellular interactions are generally facilitated by cell-adhesion molecules (CAMs) such as cadherin or nectin, often in a calcium-dependent process. The complexity of the cytoplasmic region on the other hand has yet to be fully defined. This region, which has been visualized as a dense plaque of proteins that contains a vast array of structural and scaffolding proteins as well as regulatory proteins. Read more..

How do transient linkages mediated by adaptor proteins lead to the stabilization and maturation of adhrens junctions?Sruthi Jagannathan2018-01-19T13:08:09+08:30

How do transient linkages mediated by adaptor proteins lead to the stabilization and maturation of adhrens junctions?

It is unlikely that any single protein is responsible for linking the catenin-cadherin complex with the actin cytoskeleton. Instead, eplin and vinculin, as well as additional candidate proteins such as ZO-1, α-actinin, afadin are likely to contribute in a manner that is cell type dependent. Read more..

What is the role of EPLIN in the stabilization and maturation of adherens junctions?

Recruitment of EPLIN, which is not expressed in all cell types but is found exclusively in AJ, has been shown to be tension dependent. In this case EPLIN binds to the sides of F-actin where it stabilizes and/or crosslinks bundles of actin filaments to prevent Arp2/3 binding and subsequently, filament branching. Read more..

How are various adaptor proteins recruited to the cytoplasmic plaque of adherens junctions?Sruthi Jagannathan2018-01-19T13:06:45+08:30

How are various adaptor proteins recruited to the cytoplasmic plaque of adherens junctions?

The difficulties in establishing a direct link between the α-catenin–β-catenin complex and the actin cytoskeleton underlies a higher degree of complexity in the intracellular structure of AJs. Much of this complexity stems from the multiple interactions that each component can engage. Read more..

How is adherens junction formation initiated by the fork initiation and zipper model?Sruthi Jagannathan2018-01-19T13:05:25+08:30

How is adherens junction formation initiated by the fork initiation and zipper model?

The establishment of initial contacts at adhesion sites occurs cia nectin-nectin cis interactions that enable the formation of nectin-nectin trans interactions on apposing cells. These interactions, being uncooperative and short-lived in nature, are suited to the exploratory cell behavior initiated between cells coming into close contact. Read more..

What is the physiological function of non-junctional cadherin clusters?

In addition to the well-established role of classical cadherins in mediating intercellular adhesions, recent research has also revealed the existence of distinct cadherin clusters outside of these adhesions. The physiological significance of such non-junctional cadherin clusters was elucidated in a recent study that analyzed the organization and functions of HMR-1, the C.elegans homolog of cadherins, within its single-celled zygote that is devoid of any intercellular junctions. Read more..

What is the role of cadherin interactions in initiating adherens junction assembly?Sruthi Jagannathan2018-01-19T12:54:25+08:30

What is the role of cadherin interactions in initiating adherens junction assembly?

Most cadherins adhere by homophilic interactions (i.e. they bind to the same type of cadherin) but certain types (e.g. E-cadherin) also adhere by heterophilic interactions (i.e. they bind other types of cadherin). Cadherin association is sensitive to extracellular calcium (hence their name, calcium adhering).Classical cadherins also interact directly with p120ctn at their transmembrane region and through their cytoplasmic tails to beta (β)-catenin or plakoglobin(i.e. gamma [γ]-catenin). Read more..

The study provides insights into the highly coordinated and dynamic cellular and molecular events that ensure the maintenance of tissue integrity during cell extrusion process. This knowledge is important to understand how healthy, functional tissues are maintained during development as well as during tissue repair and regeneration in adult organisms. Also, this knowledge could be useful in the field of regenerative medicine, wherein better optimization of tissue engineering conditions could lead to improved clinical results.