How do forces affect actin remodeling at distant locations in a cell?

Forces applied at the periphery of a cell causes actin remodeling around the nucleus, leading to the formation of a transient perinuclear actin rim. The formation of this actin structure is dependent on the force-induced release of Ca2+ ions in the cytoplasm, and is mediated by the formin family member, INF-2.

These findings were published in PNAS in 2015.

More information on the Shivashankar Lab.

Figure: The schematic represents the long-acting effects of locally applied forces. a) local forces (100-200 nN) are applied at the cell periphery using an AFM tip. b) application of forces triggers the release of intracellular Ca2+ ions. c) Ca2+ signaling induces actin remodeling around the nucleus via inverted formin-2 (INF-2),  leading to the assembly of a transient perinuclear actin rim. 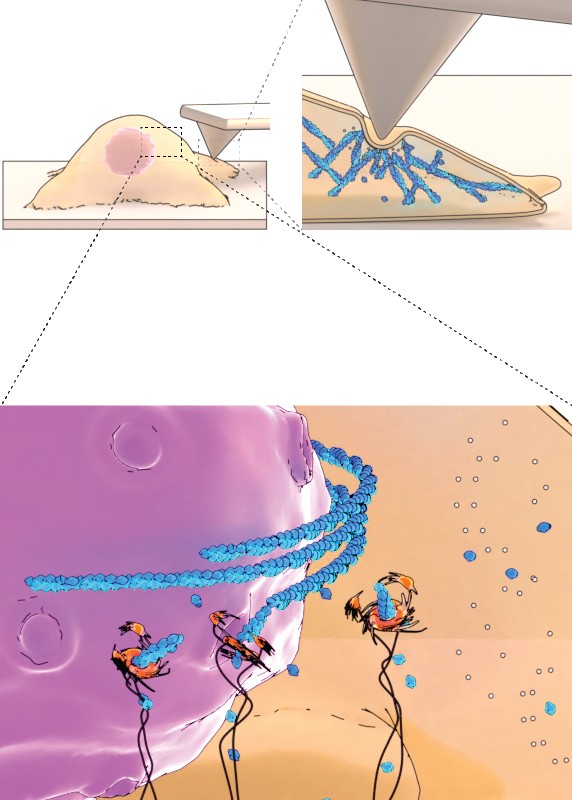 Cells respond to the physical properties of their surroundings by remodeling their cytoskeleton, mainly actin filaments, into higher order structures that can propagate forces across the cell. Numerous studies have shown how forces affect actin remodeling directly at sites of force application. However, their effects on actin filaments at distant locations remained uncharacterized until recently.

This study reveals a previously unidentified, far-acting effect of forces on actin remodeling. By using a specially designed atomic force microscopy tip to apply forces of a magnitude between 100-200 nN at the cell periphery, the researchers noted the assembly of actin filaments around the nucleus into a transient high-order structure, which they called the perinuclear actin rim. The assembly of the perinuclear actin rim was dependent on force-induced release of Ca2+ in the cytoplasm, and was found to be mediated by the actin filament nucleation and elongation factor, inverted formin-2 (INF-2).

The perinuclear actin rim is associated with two main functions: relaying mechanical signals from the cytoplasm to the nucleus, and shielding the genome from any mechanical perturbations that could reach the nucleus.

Formins promote the elongation of pre-existing actin filaments by removing barbed end capping proteins and forming a sleeve around actin subunits. Formins are also capable of actin nucleation, which is the de novo assembly of actin filaments from actin monomers. Activated formins exist as dimers and form a donut-shaped complex around terminal actin subunits, orienting themselves toward the barbed (+) end of actin filaments. The FH2 domain facilitates binding to the growing filament; this requires removing capping proteins from the barbed ends and preventing re-capping in order to allow continued growth of actin filaments. Ena/VASP proteins support formin-mediated filament elongation by tethering the filaments near sites of active actin assembly. Each formin monomer then binds and captures profilin proteins through its FH1 domain, which are already bound to G-actin monomers. The monomers are then added to the growing actin filament.

Cytoskeletal filaments- actin filaments, intermediate filaments, and microtubules, bridge the nucleus to the plasma membrane, which in turn is anchored at sub-cellular sites to extracellular substrates via a plethora of proteins that form focal adhesions. The cytoskeletal filaments converge on the nucleus, where they bind directly to KASH domain proteins such as the nesprin proteins. These proteins localize on the outer nuclear membrane and are part of a larger complex known as the Linker of Nucleoskeleton and Cytoskeleton (LINC) complex: a physical link that enables force transmission across the nuclear envelope to impact processes within the nucleus. Such transduction is possible as nesprin proteins are connected to the inner nuclear membrane through dimers of the SUN-domain adaptor proteins (Sad1p, UNC-84). These SUN proteins are in turn anchored to nuclear lamins, and chromatin, inside the nucleus. These links are emerging to be pivotal in various physiological processes including cell migration, and in the ability of cells to cope with mechanical stress.

How does a cell begin to produce filopodia?

The first step in the formation of a filopodium is the nucleation of actin filaments from G-actin monomers. This is facilitated by various proteins known as nucleators, and may occur via the ‘tip nucleation model’ or the ‘convergent nucleation model’… Read more…

How do actin filaments respond when external forces are applied to the cell?

Actin filaments and their associated focal adhesion complexes act as information handling machines or mechanosensors: they convert both the strength of the adhesion and the tensile forces along the linked network of actin filaments (and associated proteins) into biochemical signals that control actin extension and cell migration… Read more…

How do actin filaments respond to changes in the internal cellular forces?

The orientation of individual actin filaments in the cytoskeleton is a force-driven evolutionary process that contributes to the elastic behavior of the network and influences whether a filament will deform by compression, bending or extension. Cross-linked actin networks initially become more elastic under low force as a result of filament resistance to the direction of compression. As the force increases, individual filaments inherently resist being compressed and/or cross-linking proteins become more extended, which causes the cytoskeleton network to become more rigid; cell stiffening has also been correlated with actin recruitment… Read more…

What factors influence the protrusive force of actin filaments?

Actin filaments are initiated with their barbed ends oriented towards the plasma membrane, with ATP hydrolysis facilitating filament growth. Polymerization is favored towards the cell front and disassembly occurs more frequently at the rear. However, only a small fraction of the overall free energy of nucleotide hydrolysis is needed to modulate G-actin monomer binding. The remaining energy is translated into a protrusive force that deforms the plasma membrane in a particular direction… Read more…