The binding of H-NS to the bacterial DNA is initiated by electrostatic interactions between the positive residues on the H-NS linker and the negatively charged DNA. The initial contacts established by the linker then promotes engagement by the C-terminal DNA-binding domain of H-NS proteins.

These findings were published in PNAS in 2017.

[More information on the Kenney Lab and the Yan Lab] 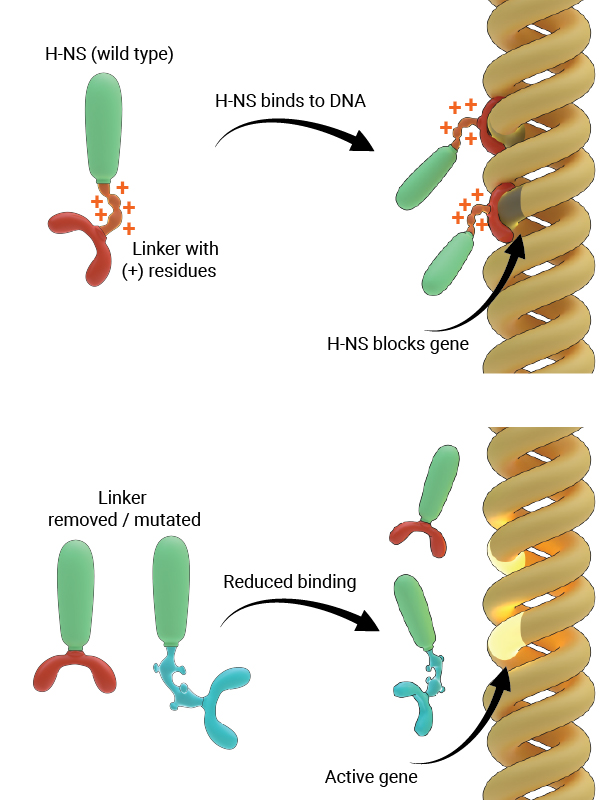 The study identifies a role for the H-NS linker region in initiating H-NS binding to bacterial DNA. The findings in this study highlight the significance of five positively-charged residues on the linker (2 arginines and 3 lysines) in promoting electrostatic interactions with the negatively-charged DNA. The initial contacts made by the H-NS linker promotes further engagement by its C-terminal DNA-binding domain. H-NS binding leads to the stiffening of the DNA filament and make it inaccessible to the DNA transcription machineries, thereby silencing the expression of genes located within this stretch of DNA.

The bacterial genome is organized into complex structures called nucleoids, wherein the millimeters-long, circular DNA is condensed into micron-sized dense assemblies of DNA, RNA, and nucleoid-associated proteins (NAPs).  Despite being densely compacted, the DNA in the nucleoid remains accessible to DNA transcription and protein synthesis machinery, suggesting that the nucleoid is a structurally-organized entity. Several factors drive the compaction of DNA in the nucleoid, including DNA supercoiling, macromolecular crowding, association of NAPs to the DNA, and the presence of specific DNA sequences that affect the flexibility of the DNA. Several studies have combined high-throughput techniques such as chromatin immunoprecipitation with either microarrays (ChIP-chip) or next-generation sequencing (ChIP-Seq) to characterize DNA binding by nucleoid-associated proteins such as H-NS, Fis, HU, IHF, etc. Such studies described how NAPs are important for establishing and maintaining the nucleoid structure.

Alterations to the chromatin structure occur as a consequence of the limitations acquired through its condensation. As chromatin is condensed into the primary nucleosome structure, DNA becomes less accessible for transcription factors. With the loosening of this chromatin structure, however, transcription machinery is better able to access the genomic DNA, and transcription is thus promoted. Hence, nucleosome organization and dynamics are regularly modified by the combined influence of covalent post-translational modifications (PTMs), histone chaperones, ATP-dependent nucleosome remodelers and histone variants.

During an infection, an external virulent agent like bacteria, virus or fungi, invades into body tissues and proliferates, causing disease. The ability of a bacteria to invade a cell or tissue, to establish an infection within the body and to avoid or even exploit the immune response is often dependent on the bacteria’s ability to manipulate the host cytoskeleton, and exploit various biochemical pathways that respond to changes in mechanical stimuli. While some molecular mechanisms may be unique to a particular pathogen, some may be conserved across species.