NIH3T3 fibroblasts respond to TNFα-mediated signaling in a geometry-dependent manner, which is essential for maintaining their cellular homeostasis. In cells of different geometries (circular vs rectangular), TNFα induces differential translocation of transcription factors and the expression of different set of target genes.

This study was published in PNAS in 2017.

More information on the Shivashankar Lab. 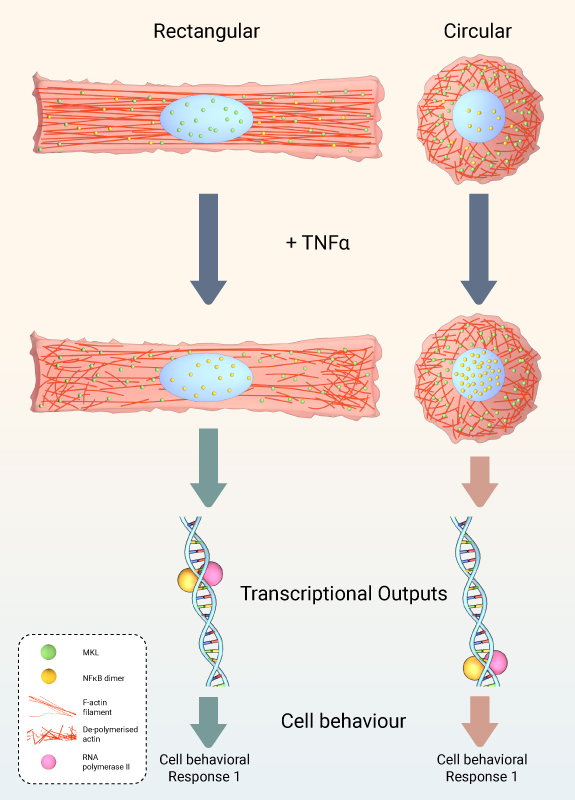 This study describes a close interplay between the mechanical state of the cell and the biochemical signals arising from its surroundings in regulating its nuclear signaling and gene expression programs. By using fibronectin micropatterns to constrain NIH3T3 fibroblasts into rectangular or a circular geometries, the study shows how cells of different geometries respond to TNFα-mediated signaling through differential localization of transcription factors and modulation of their gene expression programs. For instance, in rectangular cells, TNFα-mediated signaling induces Rho inhibition and F-actin depolymerization that leads to the nuclear shuttling of the transcription factor NFκB. TNFα-induced F-actin depolymerization also causes another transcription factor, MKL (it primarily associates with G-actin), to exit from the nucleus and translocate to the cytoplasm. However, in circular cells- which have high NFκB and low MKL in their nuclei to begin with- TNFalpha treatment does not lead to significant changes in the localization of these transcription factors. Therefore, TNFalpha signaling defines distinct genetic programs for different mechanical states of the cell. This is important for cells to maintain homeostasis within the constantly evolving tissue environment.

Cells are capable of relaying mechanical stimuli from their physical environment all the way down to the nucleus through electrochemical, biochemical or mechanical pathways. In many cases the activation or suppression of a given pathway by a mechanical cue gives rise to alterations in gene expression. Mechanical signals initiate biochemical pathways through conformational changes in mechanosenstitive proteins that leads to chemical signal propagation and amplification. These proteins then interact with downstream mediators before eventually reaching the nucleus and initiating changes in gene expression. This final ‘end point’ in the pathway can be achieved through activation of transcription factors, the formation of transcription complexes or through a physical remodeling of chromatin or other nuclear components. Of particular importance in biochemical mechanotransduction are phosphorylation events or other post-translational modifications of proteins, as these events are often associated with changes in transcription. Furthermore, mechanosensitive proteins may also mediate the nuclear translocation of transcriptional regulators, where they bind to specific regulatory sites on DNA to initiate gene expression.

NFκB (nuclear factor kappa light chain enhancer of activated B cells) is a family of highly conserved transcription factors that regulate many important cellular behaviours, in particular, inflammatory responses, cellular growth and apoptosis. NFκB is also involved in diseases such as cancer, arthritis and asthma. NFκB is formed through the homo- or hetero-dimerization of members of the Rel family of DNA binding proteins. In mammals these include RelA (p65), c-rel, RelB, p105 (the precursor of p50), and p100 (the precursor of p52). Each member of this family contains a Rel homology domain (RHD), which itself consists of a DNA binding region, a dimerization region and a nuclear localization signal. NF-κB activity is regulated by family of proteins known as IκBs which include IκBα, IκBβ, IκBγ, IκBε and Bcl-3. When in their inactivated state, NFκB complexes are localized in the cytoplasm, in complex with IκB kinase-α (IKKα), IκB kinase-β (IKKβ) and IKKγ/NEMO, a non-enzymatic protein that may function as a scaffold. The IKK complex can be activated by various cytokines, inflammatory molecules and stress signals. Depending on the composition of NFκB in the nucleus, different genes will be actively transcribed. This variation and specificity in gene targets is further determined by the post translational modification of different subunits, such as the phosphorylation of p65. NFκB has also been identified as a mediator of mechanotransduction in several cell types. This role is carried out through changes in both its activation, and localization, in response to mechanical signals.

Actin filament depolymerization helps to maintain a pool of actin monomers that permits the continual restructuring and growth of the actin cytoskeleton. Disassembly of actin filaments occurs at the pointed end of the filament and is driven by the ADF/cofilin (AC) family of proteins. Actin monomers intrinsically dissociate from the barbed end at a faster rate than they do from the pointed end. This is counteracted by the binding of capping proteins or formins to the barbed end, creating a more stable filament. The action of cofilin at the pointed end serves to destabilize the filament and promote the release of ADP-actin monomers. The destabilized form of actin filaments, which has been compared to that observed in younger filaments, is more prone to filament severing. The higher affinity of ACs for ADP-F-actin relative to ATP-F-actin causes severing in the central regions of filaments where ADP-actin is enriched, though depolymerization at the pointed end also occurs. The phosphorylation of cofilin greatly reduces its F-actin binding and depolymerizing activity. Cofilin phosphorylation in vertebrates is controlled by the activity of Rho GTPase and Lim kinase pathways.

What is the steady state phase of actin filament assembly?

In the steady state phase, actin filament dynamics enter a state of equilibrium where monomer disassembly from the (-) end and polymerization at the (+) end is balanced and maintained by a critical concentration of monomers in the cytosol. This steady state assembly and disassembly is known as ‘treadmilling’… Read more…

Along with actin filament disassembly or severing, ADF/cofilin was recently shown to carry out another important role; specifically the regulation of Myosin II mediated contractility and actomyosin formation. This was proposed to result from competitive antagonism, where myosin II must compete with cofilin for binding sites on F-actin… Read more…

How does cofilin contribute to actin filament depolymerization?

Mechanistically, cofilin binds between actin subunits when a longitudinal bond spontaneously breaks as the filament bends in thermal motion. Cooperative binding of ADF/cofilin causes the filament to twist and structurally weaken; this causes a modest severing effect that results in pointed end depolymerization and a 2-3 fold decrease in the average length… Read more…

How do actin filaments depolymerize?

Disassembly of actin filaments occurs at the pointed end of the filament and is driven by the ADF/cofilin (AC) family of proteins. Actin monomers intrinsically dissociate from the barbed end at a faster rate than they do from the pointed end… Read more…

What is NF-kB pathway?

How is crosstalk between the Rho GTPase family members important during cellular functions?Sruthi Jagannathan2018-01-19T13:56:54+08:30

How is crosstalk between the Rho GTPase family members important during cellular functions?

Although Rho, Rac and Cdc42 have distinct functions in cell migration and cellular wound repair, cross-talk between the Rho GTPases and the cytoskeleton is critical for these processes. For example, during wound healing, Rho is required for myosin II activation, Rho and Cdc42 for actomyosin ring stabilization and Rac for actin mobilization towards the wound. Read more..

Which are the regulators and effectors of Rho GTPases?

What are Rho GTPases?

The Ras homologous (Rho) protein family is a member of the Ras superfamily of small GTPases. They are highly conserved in all eukaryotes studied so far and Rho, Rac and Cdc42 are the most prominent of the 20 members identified. Read more..