Clathrin-mediated endocytosis (CME) occurs as periodic traveling waves, being co-ordinated spatially and temporally through the nucleation of actin waves. The link between endocytosis and generation of cortical actin waves may provide deeper insight into how cells maintain the composition and dynamics of the plasma membrane

These findings were published in Developmental Cell in 2017.

More information on the Wu Lab

Figure: The top left of the figure depicts a cell with clathrin-mediated endocytic waves. The top right depics a cross section of the cell with clathrin assembly in process through collective dynamics. Onset of clathrin waves require intermediate levels of PIP3 (red) as well as feedback from downstream components of cortical wave machinery such as FBP17 (green). The arrow represents direction of propagation of clathrin waves. 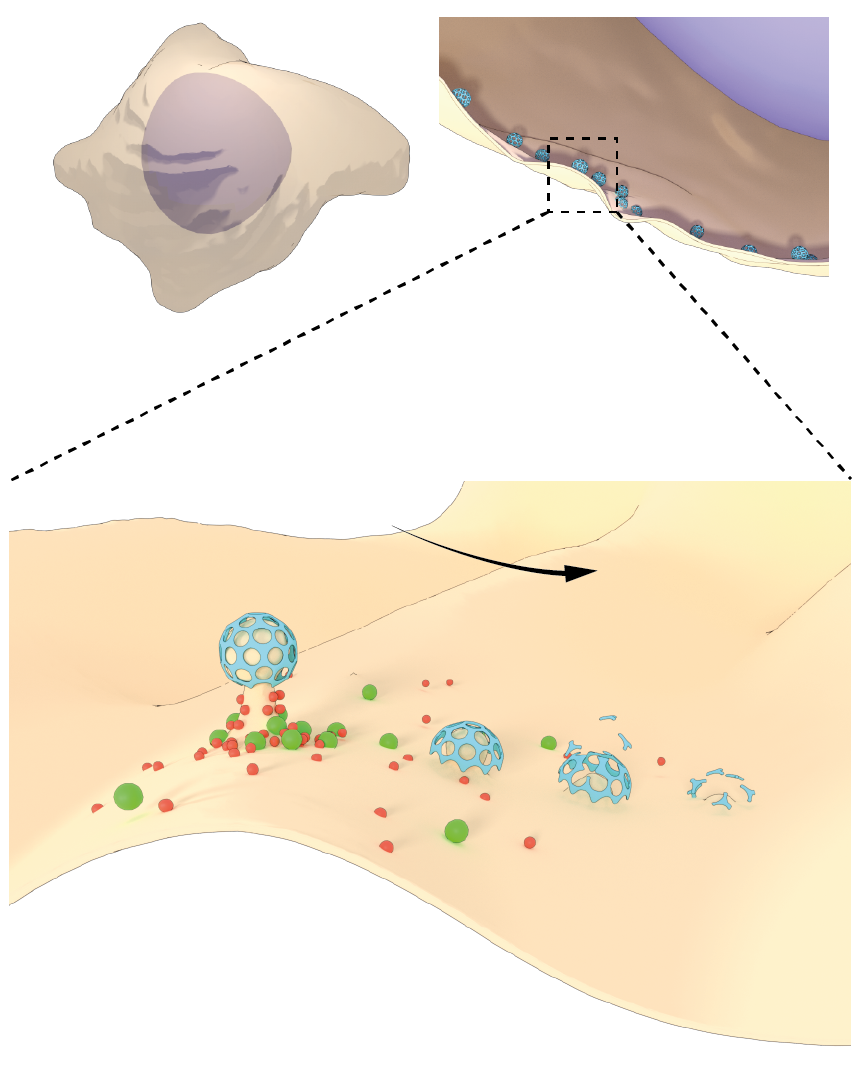 Clathrin- Mediated Endocytosis (CME) was previously established as a random endocytic event with no spatial or temporal coordination of events. However, this study reveals the existence of collective dynamics of CME, where the individual events of CME such as clathrin nucleation, clathrin coated pit (CCP) formation, recruitment of F-BAR proteins, Cdc42 and N-WASP, are synchronized and appear as periodic traveling waves. The observed collective dynamics of CME occurs when coupled through feedback between clathrin and downstream players of CME such as Cdc42/F-BAR. This study also reveals a role for clathrin in organizing the geometry of cortical waves in addition to regulating its onset.

Clathrin-mediated endocytosis (CME) is a vesicular transport event that facilitates the internalization and recycling of receptors engaged in a variety of processes, including signal transduction (G-protein and tyrosine kinase receptors), nutrient uptake and synaptic vesicle reformation. Two classical examples of CME are iron-bound transferrin recycling and the uptake of low-density lipoprotein (LDL). CME is characterized by the involvement of clathrin, which is a triskelion-shaped scaffold protein composed of three heavy and three light chains. Clathrins polymerize around the cytoplasmic face of the invaginated membrane and act as a reinforced mould in which the membrane vesicle may form. Initiation of the clathrin complex formation requires the accumulation of phosphatidylinositol‑4,5‑bisphosphate (PIP2) and adaptor proteins, such as AP-2, at the pinching site.

Examples of NPF accessory proteins include Verprolin (yeast), which modulates the activity of WASp with type I myosins, to promote actin assembly by Arp2/3 complex. WASp-interacting proteins (WIPs) will also regulate the WASp activity… Read more…

What are some common actin binding drugs used in the lab today?

Toxins such as phalloidins, cytochalasins, latrunculin A, and jasplakinolide are naturally occurring small molecules that bind to actin and alter its polymerization… Read more…

Formins are also capable of actin nucleation, a process which is spatiotemporally coupled with actin disassembly. Formins nucleate and polymerize actin filaments at focal adhesions at a rate of around 0.3 µm/min… Read more…

Although the most commonly described nucleators are the Arp2/3 complex, and the formins, a third group, known as ‘tandem-monomer-binding nucleators’, has also been identified. Each member possesses tandem repeats of G-actin binding motifs. Included in this group of nucleators are the Spire proteins, Cordon-bleu (Cobl), Leiomodin (Lmod-2), JMY and adenomatous polyposis coli (APC)… Read more…

How does Arp2/3-mediate the nucleation of branched filaments?

The Arp2/3 complex is composed of 7 evolutionarily conserved subunits (Arp2, Arp3, ARPC1-C5) that are structurally similar to the barbed end of actin [1]. The complex is inherently inactive, however once activated it facilitates the nucleation of actin monomers from existing filaments as new branches or daughter filaments… Read more…

What is actin nucleation?

Actin nucleation sees the formation of an actin nucleus, which is essentially a complex of three actin monomers, from which an actin filament may elongate. This process most commonly involves actin nucleators such as the Arp2/3 complex or members of the formin family of proteins… Read more…

Knockdown of Arp2/3 in cultured neurons as well as loss-of-function mutations in C. elegens and cultured Drosophila neurons, was shown to cause a disruption in filopodia initiation and subsequently a decrease in the number of filopodia… Read more…