How is polarity established by cellular forces?

Cellular forces, such as the tension generated by the contraction of the actomyosin cortex, establishes polarity by facilitating the clustering of polarity (PAR) proteins and passively transporting these proteins clusters to one side of the cell along with the cortical flow.

These findings were published in Nature Cell Biology in 2017.

More information on the Motegi Lab.

Figure: The schematic depicts the role of cortical tension in establishing cell polarity. The PAR proteins- PAR3, PAR6, and PKC3, which together form one of the major polarity complexes in cells- are diffused throughout in the cortex in the earliest stages of embryonic development (top embryo). Soon after, the tension generated by actomyosin contractility at the cortex induces the clustering of PAR3 and PKC3, and these PAR3-PKC3 clusters are then easily transported by advective cortical flow (represented by black arrows in the bottom embryo) to one side of the cell. The tension-induced asymmetric distribution of PAR complex proteins occurs as the earliest events in the establishment of cell polarity. 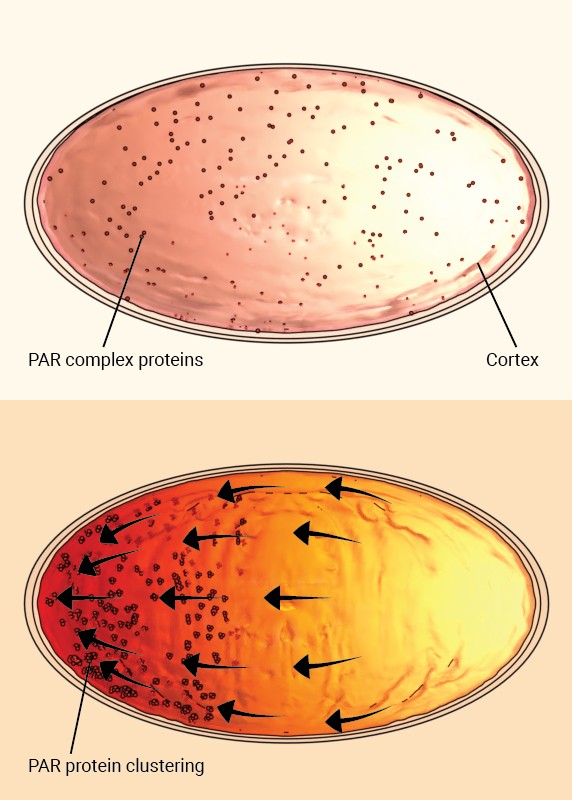 All fundamental cellular processes, such as cell shape changes, division, and migration, depend on their polarization into regions with distinctive structural and molecular arrangements. In the C. elegans zygote (one of the best-studied models for cell polarization), embryonic development starts with the establishment of anterior-posterior (front-back) polarity in cells. However, the finer details underlying this subcellular process were largely uncharacterized.

This study proposes a mechanically-driven cell polarization process: the tension generated from the contraction of the actomyosin cortex facilitates the clustering of the polarity proteins PAR3 and PKC3 into high-intensity clusters at the cortex. The clustered PAR proteins have low turn-over rates, and are subsequently passively transported by cortical flows to one end of the cell. This asymmetrical distribution of proteins in cells marks the beginning of cell polarization.

The study also highlights the role of the Rho GTPase family member, CDC42, in PAR protein clustering. Active forms of CDC42 were shown to restrict the incorporation of PKC3 and another PAR protein PAR6 into these clusters.

Cell polarity refers to the intrinsic asymmetry observed in cells, either in their shape, structure, or organization of cellular components. Most epithelial cells, migrating cells and developing cells require some form of cell polarity for their function. These cells receive information about their surroundings via extracellular biochemical and mechanical cues and translate those information into polarity of the plasma membrane, its associated proteins and cytoskeletal organization. Once established, cell polarity is maintained by transcytosis, in which vesicles carry incorrectly-localized membrane proteins to the correct regions in the plasma membrane. In addition, tight junctions, which act as ‘fences’ against transmembrane diffusion, lock the asymmetry in place.

Actomyosin refers to the actin-myosin cortex that forms within the cytoskeleton. Actomyosin in inherently contractile, with the myosin motor protein pulling on actin filaments. This property gives rise to contractile fibers that form the basis of skeletal muscle, and enable cell motility and force generation in non-muscle cells. In many cell types, higher-order contractile structures that consist of parallel bundles of actin and myosin filaments are distributed inside the cytoplasm. The actomyosin contractile fibers, which are linked at their ends to the extracellular matrix (ECM) via cell-matrix adhesions, exert traction on the ECM that generates tensile forces within the cellular cytoplasm. The intracellular forces generated by actomyosin contractility enable the cell body to translocate during migration, and also serve as a vital inside-out feedback system to regulate actin filament initiation, cell growth, and motility.

Three protein complexes are important for defining cell polarity: the Scribble, the Crumbs, and the PAR polarity complexes. While the PAR and the Crumbs complexes are restricted at the apical surface, the Scribble complex is localized to the basolateral domain. The three complexes interact with each other and with a number of cytoskeleton-associated proteins to fine-tune localized signals. The polarity complexes take their localization cue from the adherens junctions and tight junctions. For instance, Par3 localizes to the tight junctions by binding to the junctional adhesion molecules (JAMs) via its PDZ1 domain, while local Cdc42 and Rac activation at the AJs serve to recruit a-PKC to the apical surface.

Along with actin filament disassembly or severing, ADF/cofilin was recently shown to carry out another important role; specifically the regulation of Myosin II mediated contractility and actomyosin formation. This was proposed to result from competitive antagonism, where myosin II must compete with cofilin for binding sites on F-actin … Read more…

What function does actomyosin have in non-muscle cells?

Non-muscle myosin II isoforms have a similar structure and function to their muscle equivalents. However, their interaction with actin serves to generate cellular forces rather than muscular contraction… Read more…

How are contractile bundles arranged in non-muscle cells?

In non-muscle cells, myosin II associates with actin filaments to form contractile structures known as stress fibers along the lower surfaces where the cell is anchored to its substrate. In epithelial cells, contractile bundles are also prominent in the adhesion belt (aka adherens belt), which helps to maintain the stability and integrity of epithelial cell sheets. The contractile bundles in nonmuscle cells are similar to skeletal muscle fibers, but they are smaller (~0.4 µm in fibroblasts), less organized, and they contain different accessory proteins … Read more…

What are muscle sarcomeres?

In skeletal muscle cells, myosin II forms only thick filaments that are arranged within a scaffold of actin thin filaments (along with numerous other proteins). These form the higher order fibrous structures known as sarcomeres… Read more…

Contractile force can be inhibited using small molecules such as blebbistatin . This is a cell-permeable, highly specific small-molecule inhibitor of myosin II Mg-ATPase activity that is used for investigating the role of myosin II in cell contraction and motility. Blebbistatin inhibits both myosin isoforms IIA, IIB, and skeletal muscle myosin II but has little effect on smooth muscle myosin II and myosins I, Myosin V, and Myosin X … Read More…

What is the average diameter of a contractile bundle?

What are contractile fibers?