How can super resolution imaging be used to assess nanoscale chromosome contacts?

This research provides the first direct visualization of functional gene clusters, at a nano-scale level. Functional gene clusters are genes that may be on the same or different chromosomes but are regulated by the same transcriptional factors that enable their intermingling with each other through chromosomal contacts formed in space. In this paper a novel method of preparing open chromatin spreads suitable for superesolution imaging of chromosomal contacts is described.

The findings described on this page were published in Scientific Reports

More information on the Shivashankar Lab

Figure: The schematic shows the steps involved in visualizing chromosomal contacts. First, the nucleus is isolated, treated with HindIII to digest chromatin fibers into smaller fragments and immunostained with antibodies for specific transcription factors and RNA pol 2. The nucleus is then mechanically ruptured to separate and spread chromatin fibers for imaging using BALM technique. 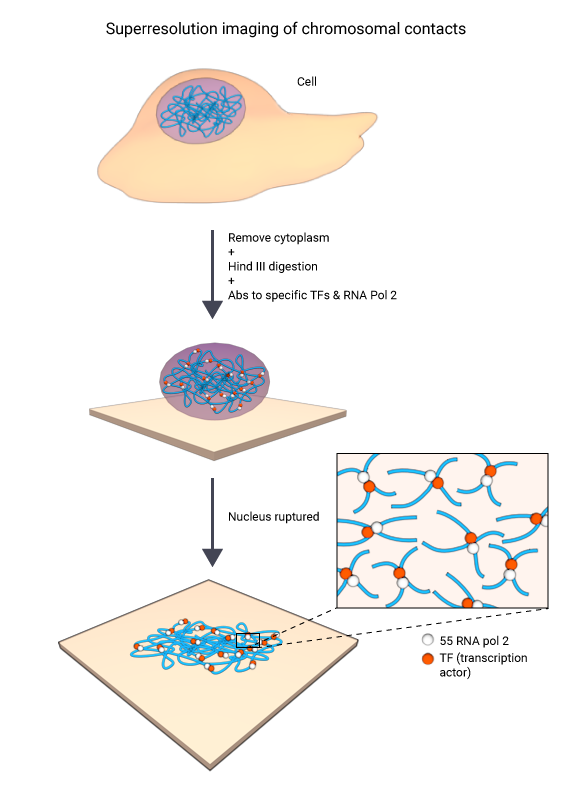 Researchers have described the direct visualization of physical contacts between regions of chromosomes that are co-transcribed. Superresolution imaging of novel open chromatin spread system was used.

Though co-expressed genes may be on different chromosomes, the non-random 3D organization of the chromosomes within the nucleus allows for physical association of functional gene clusters during transcription. By preparing open chromatin spreads from isolated nuclei and preserving the 2D organization of chromosomes, superresolution imaging revealed chromosomal contacts formed by functional gene clusters, i.e., genes that are regulated by the same transcription factors (YAP, SRF, NF-kB).

Super-resolution microscopy overcomes the diffraction limit of conventional light microscopy by at least a factor of two, providing a resolution of 100 nm or smaller. Diffraction is a manifestation of the wave properties of light. In a typical light microscope operating in the visible spectral range (400-700 nm) (see Figure below), diffraction determines the smallest focal volume that light can be focused into.The diffraction limit of light microscopes, known as the point spread function (PSF), limits resolution to ~250 nm in the X-Y image plane and ~500 nm along the Z optical axis [2]. In conventional light microscopes such as confocal or TIRF (Total Internal Reflection Fluorescence), structural features lying closer to each other than the PSF length scale cannot be resolved. This includes cellular structures that contribute to cell motility, force generation and mechanosensing such as actin filaments, microtubules and focal adhesion complexes.This limitation has however been over come with the development of various super resolution microscopy methods.

Binding activatable localization microscopy (BALM) enables a resolution of ~30nm. This imaging technique was developed based on a similar principle as photoactivatable localization microscopy (PALM) and stochastic optical reconstruction microscopy (STORM). The illumination of a sparse set of fluorophores enables the detection of single molecules, and the repetitive capturing of such sparse sets of fluorophores on a total internal fluorescence (TIRF) microscopy is used to reconstruct superresolution images.In BALM, fluorophores are “switched on” when bound to the target structure, for example, DNA-binding dyes that show a strong fluorescence enhancement when bound to dsDNA, such as YOYO-1. YOYO-1 fluoresces 800-1000 times more when compared to free YOYO-1 molecules.

The nuclear architecture is further determined by a non-random, three-dimensional positioning of the chromosomes into distinct chromosomes territories. This spatial organization of chromatin contributes further to the regulation of gene expression. This has been shown in studies exploring the radial alignment of chromosomes, where gene-active chromosomes were shown to localize near the center of the nucleus and gene-inactive chromosomes at the nuclear periphery. Additionally, studies using chromosomal capture assays have demonstrated the presence of chromosome neighborhoods, such as interchromosomal compartments (ICs), which house the transcription machinery. These ICs function as regions for gene co-regulation, where gene-rich regions of neighboring chromosomes form loops that intermingle, thereby allowing transcriptional machinery to be shared by neighboring chromosomes.

This imaging method together with sequencing of gene clusters will provide avenues to map the spatial configuration of genes that are in physical proximity in cell type specific transcription regulatory networks.

This will make possible to analyze gene clusters in normal cells and in cells related to specific gene clusters.

Recent Papers from the Author