Skip to content
What is the role of basolateral cell protrusions in driving Drosophila germ-band extension?steve2018-02-19T11:10:53+08:30

What is the role of basolateral cell protrusions in driving Drosophila germ-band extension?

These findings were published in Nature Cell Biology in 2017.

More information on the Toyama Lab at MBI 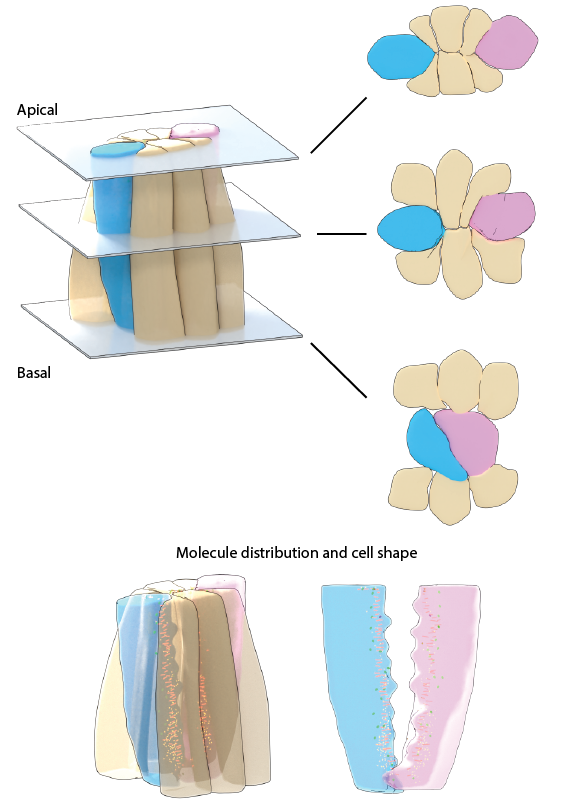 Germband extension is a tissue remodeling event that occurs during the gastrulation stage of the Drosophila embryonic development. During this process the germband, which is the region of the embryo that gives rise to various segments of the body, doubles in length along the anterior-posterior axis while simultaneously narrowing down along the dorsal-ventral axis through a series of cellular rearrangements.

Cell intercalation is the most prominent type of cellular rearrangement driving Drosophila germband extension. Intercalation is accompanied by the formation of rosette-like patterns on the apical sides of cells along the anterior-posterior axis, which is driven by actomyosin contractions and apical junction reorganization events. However, the dynamics occurring on the basal region of cells were largely unknown.

In this study, Sun et al have used live imaging of embryos to reveal the formation of rosette patterns on the basolateral sides of cells during germband extension, and specifically, cell intercalation. In most cells, basolateral rosettes are seen to form earlier than the apical rosettes. The formation of basolateral rosettes are initiated by the dorsal most and ventral most cells of the cell cluster, which put forth actin-based, wedge-shaped protrusions at their cell fronts.  The protrusions facilitate the movement of the two cells towards each other along the dorsal-ventral axis, causing the neighboring cells to realign into a rosette pattern on the basolateral side.

Non-muscle myosin II isoforms have a similar structure and function to their muscle equivalents. However, their interaction with actin serves to generate cellular forces rather than muscular contraction. During non-muscle actomyosin contractility, non-muscle myosin II uses energy from ATP hydrolysis to slide the actin filament to produce contractile force, and these forces have been implicated in multiple cell functions, such as cell adhesion, establishing cell polarity, and cell migration. During cell division, actomyosin contractility regulates forces on the nucleus which affect DNA synthesis and chromatin organization, and is also required for formation and contraction of the mitotic spindle.

Actin filaments are the primary cytoskeletal component to drive cell motility. Actin filaments found in membrane protrusions such as filopodia and lamellipodia rapidly assemble and disassemble. These cellular structures are essential in cell migration and are predominately found at the leading edge of a moving cell. They also allow the cell to probe or sense its microenvironment. Actin filaments are also found at the trailing edge in the form of the cell cortex, which lies adjacent to the plasma membrane. More stable arrays of actin filaments, such as those found in stress fibers, allow a cell to brace against the underlying surface. Actin-associated myosin motor proteins use ATP hydrolysis to exert forces against the stress fibers during muscle contraction; the energy of hydrolysis can also be converted to tensile forces at the trailing cell edge to promote edge retraction in motile cells.

Typically filopodia are quite dynamic and are constantly growing or retracting. Thus, periods of stasis are often short-lived and even adhesion of the filopodial tip to a substrate will not last long before the cell pulls on the site and recruits additional components or retracts, leaving behind a thin tube of membrane. There are several events that may promote stasis in retracting filopodia. These include ligand binding to receptors on a filopodium, uncapping of the filament end or capping of unstable actin filaments… Read more…

A number of factors regulate collapse and retraction. For example, capping proteins promote filopodial retraction by shielding the barbed end of filaments from further assembly and elongation … Read more…

Why do filopodia shrink or retract?

How do filopodia pull on a substrate to facilitate mechanosensing?

Although a reterograde motion of actin filaments is intrinsic in the formation of filopodia, the forces generated by actin treadmilling are too weak to facilitate the “pulling” mechanism required for rigidity sensing and other mechanosensing processes. This characteristic of filopodia is instead produced by the activity of myosin motor proteins such as Myosin II … Read more…

What are filopodial basal adhesions?

Basal adhesions play a specific role in filopodia initiation and are found in ~98% of all filopodia, where they anchor the filopodial base that usually remains immobile despite considerable flexibility in the shaft . These are stable adhesions that contain a focal ring structure believed to convert tension forces into filopodia formation… Read more…

What are filopodial shaft adhesions?

A single filopodium can have both non-adherent and adherent regions along the shaft. Shaft adhesions develop de novo along the filopodium and do not represent former tip adhesions … Read more…

What are filopodial tip adhesions?

What happens when a filopodia adheres to a ligand or substrate?

A diverse array of cellular responses can result when a filopodium makes contact with a ligand or substrate. These responses are dependent on the coupling of membrane-bound proteins to the backward (retrograde) flow of actin that drives filopodia elongation and motility. Each adhesion may function independently or work in concert to produce the overall guidance response. The three types of adhesions that form within filopodia are: Tip adhesions, shaft adhesions and basal adhesions… Read more…

Do filopodia ever remain static?

Typically filopodia are quite dynamic and are constantly growing or retracting. Thus, periods of stasis are often short-lived and even adhesion of the filopodial tip to a substrate will not last long before the cell pulls on the site and recruits additional components or retracts, leaving behind a thin tube of membrane. There are several events that may promote stasis in retracting filopodia… Read more…

Can filopodia move or are they static?

Filopodia are motile structures, being able to extend, retract and move laterally as they sense their environment. Lateral movement is particularly important in allowing the structure to sense stimuli prior to its adhesion with another cell or substrate… Read more…

What factors influence the rate of filopodia extension?

The extension rate of a filopodium will differ depending on the cell type (table 1). In each case however, this rate is controlled by the availability of G-actin-ATP, associated structural components and the energetics of membrane bending… Read more…

What role does Myosin-X play in actin filament bundling?

As well as mediating cargo transport along actin filament bundles, recent studies have implicated myosin-X as integral to the initiation of filopodia and the elongation of long filopodia. This has been attributed to a mechanism of myosin-X that promotes actin filament bundling, similar to cross-linking… Read more…

How are actin filaments bundled together in filopodia?

Filopodia protrusion is aided by actin filament cross-linking, which gives the structure the strength required to push against the compressive force of the plasma membrane . Bundle stiffness increases with the number of bundled filaments and so contributes to the overall length of the filopodium . Filament bundling results from crosslinking proteins, many of which co-localize at the base of filopodia and work in concert to produce crosslinked filaments … Read more…

Knockdown of Arp2/3 in cultured neurons as well as loss-of-function mutations in C. elegens and cultured Drosophila neurons, was shown to cause a disruption in filopodia initiation and subsequently a decrease in the number of filopodia… Read more…

How does a cell begin to produce filopodia?

The first step in the formation of a filopodium is the nucleation of actin filaments from G-actin monomers. This is facilitated by various proteins known as nucleators, and may occur via the ‘tip nucleation model’ or the ‘convergent nucleation model’… Read more…

What is the main process involved in filopodia assembly?

Filopodia are dynamic structures that are primarily composed of F-actin bundles and whose initiation and elongation are precisely regulated by the rate of actin filament assembly, convergence and cross-linking… Read more…

Filopodia (singular filopodium) are thin membrane protrusions that act as antennae for a cell to probe the surrounding environment ,,… Read more…

The study shows how basic morphogenetic events such as germband extension in Drosophila are driven by active coordination of cellular dynamics at the apical and basolateral sides of cells along the anterior-posterior axis. Considering that both the actomyosin contractions on the apical side and actin-based protrusions on the basolateral side are oriented along the dorso-ventral direction, future work will be aimed at identifying factors, such as cell polarity proteins or guidance cues, that may determine directionality during cellular dynamics and the organization of cells into rosette patterns. The findings from this study could then be applied to better understand the mechanistic details that underlie morphogenetic events in other embryonic systems, such as C.elegans dorsal epidermis intercalation and Xenopus mesoderm mediolateral intercalation.

Recent Papers on this Topic