What is the role of non-junctional E-cadherin clusters?

Non-junctional E-cadherin clusters play a non-canonical role in stabilizing the cortex and resisting its flow, in addition to their well-characterized role in mediating cell-cell junctions.

This study was published in Current Biology in 2017.

[More information on the Zaidel-Bar Lab]

Figure: The schematic depicts the role of non-junctional HMR-1 clusters in resisting cortical flow and stabilizing the cortex during cellular processes such as cytokinesis. In wild-type cells, HMR-1 clusters prohibit myosin-II localization at the cortex and limit actomyosin contractility-mediated cortical flow, thereby impeding furrow ingression during cytokinesis. However, in HMR-1 depleted cells, increased actomyosin contractility- mediated by the accumulation of myosin-II at the cortex- destabilizes the cortex and promotes rapid cortical flow. This speeds up furrow ingression and other cellular processes dependent on cortical movement. 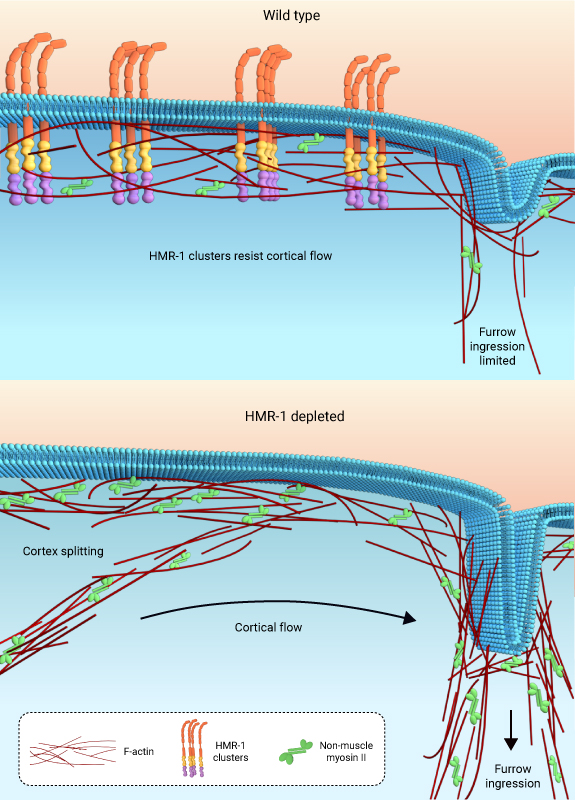 The study describes a novel role for E-cadherins in slowing down cortical flow and stabilizing the cortex, and at the same time, regulating cell shape dynamics during fundamental cellular processes such as cytokinesis. Using C. elegans embryos to study the role of non-junctional cadherin clusters, the researchers show how HMR-1 (the sole cadherin in C. elegans) aggregate into dense clusters that localize at the cell surface. The intracellular domains of HMR-1 in clusters associate with actin filaments via beta-catenins and anchor the cortical actin to the cell surface, thereby slowing down cortical flow and preventing cortical deformations. While the cortical localization of non-muscle myosin-2 (NMY-2) and actomyosin contractility is significantly downregulated in the presence of HMR-1 clusters, HMR-1 impedes cortical flow even in a NMY-2-independent manner. 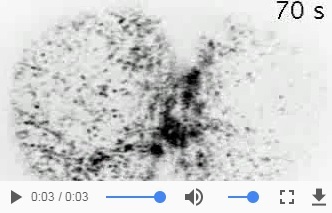 The cadherin protein family are common cell-adhesion molecules (CAMs) that mediate cell-cell contacts at anchoring junctions (e.g. adherens junctions, desmosomes) and at prominent sites of cell-cell communication (e.g. neuronal synapses). There are over 100 different cadherin family members that are grouped into at least 6 subfamilies, including type I classical cadherins, type II atypical cadherins and desmosomal cadherins. All cadherins share a common architecture in their extracellular domain that comprises cadherin repeats, with classical cadherins containing five of these repeats. Subtle differences between cadherins impart each type with specificity for particular tissue and cell types. Cadherins use a common set of adaptor molecules and pathways to facilitate cell adhesion and communication, however the strength of adhesion varies with the type of cadherin present.

The structural link between the actin cytoskeleton and cadherins in adherens junctions is comprised of direct interactions in the following order: cadherin tails bind beta-catenin, beta-catenin binds the VH1 domain of alpha-catenin, and the VH3 domain of alpha-catenin binds actin. Although alpha-catenin is known to be essential in this link, recent biochemical and in vitro studies by the Weis and Nelson group has shown that a direct link between the cytoskeleton and alpha-catenin is unlikely to occur in vivo, and instead, is likely mediated by additional adaptor proteins.

Actomyosin refers to the actin-myosin complex that forms within the cytoskeleton. Actomyosin is inherently contractile, with the myosin motor protein able to pull on actin filaments. This property gives rise to contractile fibers that form the basis of skeletal muscle, and even in non-muscle cells, enable cell motility and force generation at the sub-cellular level. Actin filament networks, both within filopodia and lamellipodia, are highly dynamic structures.  A number of cellular processes such as filopodial retraction and lamellipodial/lamellal contractions, rely on the rearward movement of the whole filament network or large filament bundles. The retrograde motion of actin treadmilling may play a minor role in aiding these processes. One class of proteins that has been implicated in the translocation of F-actin is the myosin motor protein family. Each member of the myosin family possesses unique structural and functional properties, such as their step size, that determines their ability to engage in F-actin translocation. Myosin II specifically, has been associated with F-actin retraction in several cell types including neurons, fibroblasts and keratocytes.

How do transient linkages mediated by adaptor proteins lead to the stabilization and maturation of adhrens junctions?Sruthi Jagannathan2018-01-19T13:08:09+08:30

How do transient linkages mediated by adaptor proteins lead to the stabilization and maturation of adhrens junctions?

It is unlikely that any single protein is responsible for linking the catenin-cadherin complex with the actin cytoskeleton. Instead, eplin and vinculin, as well as additional candidate proteins such as ZO-1, α-actinin, afadin are likely to contribute in a manner that is cell type dependent. Read more..

What is the role of EPLIN in the stabilization and maturation of adherens junctions?

Recruitment of EPLIN, which is not expressed in all cell types but is found exclusively in AJ, has been shown to be tension dependent. In this case EPLIN binds to the sides of F-actin where it stabilizes and/or crosslinks bundles of actin filaments to prevent Arp2/3 binding and subsequently, filament branching. Read more..

What is the physiological function of non-junctional cadherin clusters?

In addition to the well-established role of classical cadherins in mediating intercellular adhesions, recent research has also revealed the existence of distinct cadherin clusters outside of these adhesions. The physiological significance of such non-junctional cadherin clusters was elucidated in a recent study that analyzed the organization and functions of HMR-1, the C.elegans homolog of cadherins, within its single-celled zygote that is devoid of any intercellular junctions. Read more..

What is the role of cadherin interactions in initiating adherens junction assembly?Sruthi Jagannathan2018-01-19T12:54:25+08:30

What is the role of cadherin interactions in initiating adherens junction assembly?

Most cadherins adhere by homophilic interactions (i.e. they bind to the same type of cadherin) but certain types (e.g. E-cadherin) also adhere by heterophilic interactions (i.e. they bind other types of cadherin). Cadherin association is sensitive to extracellular calcium (hence their name, calcium adhering).Classical cadherins also interact directly with p120ctn at their transmembrane region and through their cytoplasmic tails to beta (β)-catenin or plakoglobin(i.e. gamma [γ]-catenin). Read more..