In eukaryotes, synthesis of DNA, RNA, proteins and lipids is performed in a spatiotemporal manner. Each molecule is produced within specialized organelles or compartments with strict regulatory mechanisms existing to control the timing and rate of synthesis. These regulatory mechanisms are complicated, and may involve feedback loops, external stimuli and a multitude of signaling pathways.

DNA and RNA are both produced within the nucleus. DNA is entirely replicated during the s-phase of the cell cycle. One copy is then passed to each of the daughter cells. During other phases of the cell cycle a minimal amount of DNA is synthesized, primarily for the repair of the genetic material. Although a basal rate of RNA synthesis maintains mRNA synthesis throughout the life of the cell, the mRNA for specific genes may only be expressed, or may be up-regulated or down-regulated, following the detection of certain mechanical or chemical signals. As a result, different cells have different mRNA profiles, and this is often observed through the use of microarray technologies that screen the genetic profiles of cells. 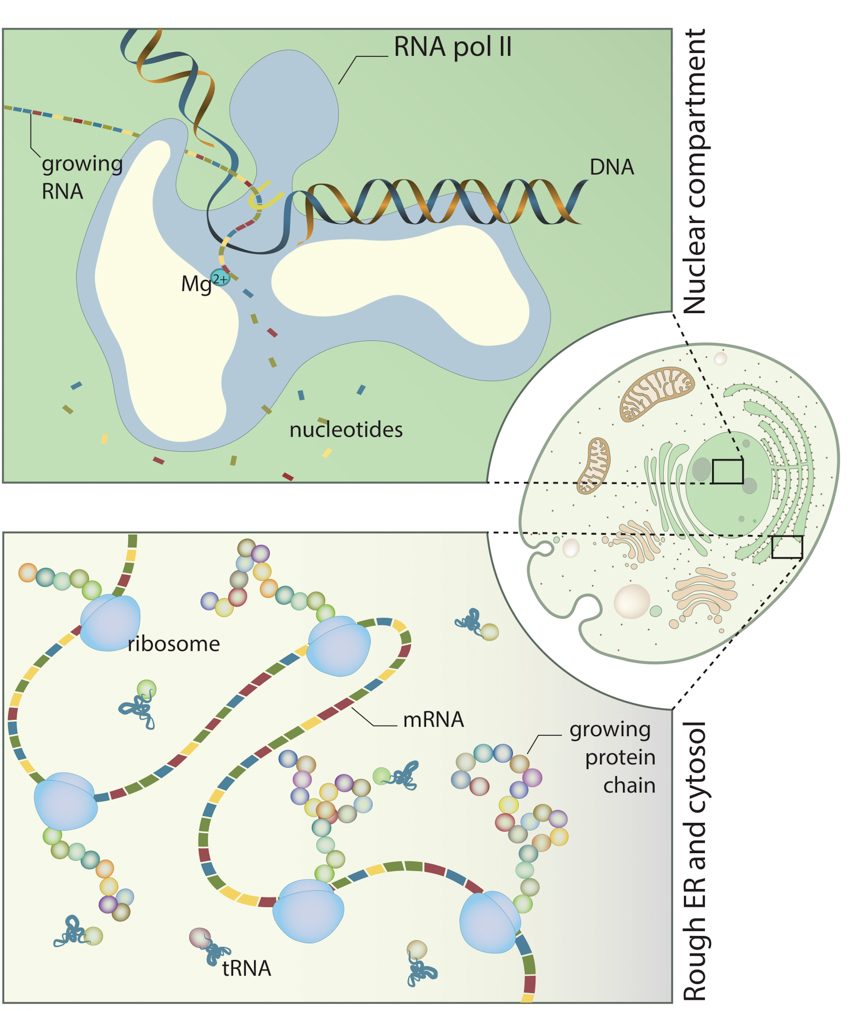 DNA and RNA are synthesized in the nucleus (upper panel). RNA is then transferred into the cytosol or rough endoplasmic reticulum (lower panel), where protein synthesis takes place.

After being processed and modified in the nucleus, transcribed mRNA is delivered to the cytosol for translation, or protein synthesis. Similar to RNA synthesis, a basic level of protein synthesis is maintained throughout the cell’s life, however this may also be altered when particular stimuli induces the production of specific proteins, or when regulatory mechanisms reduce the production of others. For example, protein synthesis is up-regulated during the G1 phase of the cell cycle, just prior to S-phase. This is to ensure the cell has a sufficient concentration of the protein machinery required to carry out DNA replication and cell division.

In prokaryotes, where there are no separate compartments, both transcription and translation occur simultaneously.

Lipids, which are synthesized in the endoplasmic reticulum (ER) or Golgi, are transported to other organelles in the form of vesicles which fuse with the acceptor organelle. Some cells may also use carrier proteins to ferry lipids from one location to another. Lipid synthesis is also dynamic, and may be up-regulated during cell proliferation or during processes involving plasma membrane extension, when new membranes are required.