How are forces transduced in a cellular environment?

The application of the tensegrity, semiflexible chain and dipole polarization models to biological scenarios has proven most successful in the case of the tensegrity hypothesis (as reviewed in [1]). The models described above lead us to consider the following three key concepts, which characterize the mechanotransduction of forces in a cellular environment. 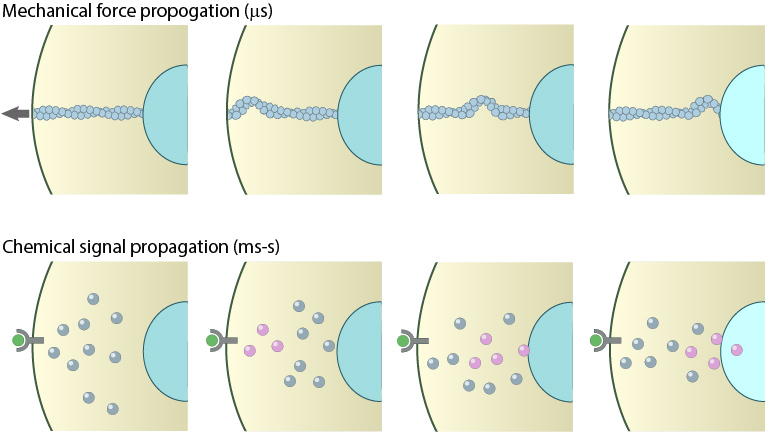 Mechanical versus chemical signal propagation. Top- Mechanical stress, whether applied to cytoskeleton-linked receptor or generated due to contractility, reaches the nucleus in less than 5 microseconds. Arrow shows direct of tension applied and propagation is depicted as a mechanical wave across the cytoskeletal networks. Bottom-Biochemical signals that originate at the membrane take tens of seconds to travel through their linked network and cause a change in the nucleus (e.g. chromosome remodeling, activate/deactivate gene expression- depicted by color change of nucleus). Adapted from PMID:[21508987],[15707995].

1) Mechanical signal propagation is rapid
Compared to soluble, ligand-induced signal transduction (by diffusion or motor-based translocation), mechanical forces applied to a cell are transmitted more than a 1000 times faster, along cytoskeletal filaments. For example, the activation of Src kinase via mechanical stimulation has been shown to occur in under a second, whilst activation via chemical stimulation requires tens of seconds or longer [2].

2) Prestressed cell structures promote long distance force propagation
The tensegrity model characterizes the cell as a hard-wired entity, composed of prestressed cytoskeletal filaments and an elastic cytosol. This is in contrast to other models representing the cell as a homogeneous elastic solid. In the latter case where all stress bearing components, namely the cytoskeleton and cytosol, have the same stiffness, force signals will rapidly decay (according to St Venants principle).

In contrast, in a prestressed environment, as defined by the tensegrity model, mechanical signals can be channeled through the cytoskeleton that is able to stiffen relative to the surrounding cytoplasm [3], [4]. The decay therefore occurs at a much slower rate than when transmitted through softer components and so the force signal is able to travel further.

The tensegrity model also supports the fact that the higher the stiffness differentials between intracellular components, the longer the distance of force propagation. The elastic cytosol and prestressed cytoskeleton are therefore ideally suited to long distance force propagation. A similar process is suggested in context of the stiff nuclear and intranuclear structures relative to the softer cytosol [5],[6].

3) Mechanochemical conversion can be induced from a distance
Mechanotransducers under tension are mechanically anisotropic i.e. elicit a response dependent on the direction of stress loading. Externally applied stress is distributed to points a few microns away from that of the applied force, according to the distribution at the time of pre-existing tensile forces (prestress) [7],[8]. A mechanochemical response can therefore be observed at local as well as distant sites, depending on the directionality of the response, as governed by the orientation of filaments interacting with the point of force application (reviewed in [9]).