How do Focal Adhesions Sense the Physical Properties of the Matrix?

Based on the hypothetical protein switches, two models (1 and 2 below) have been put forth to describe the physical mechanism of focal adhesion mechanosensitivity (reviewed in [1]). These are formulated based on the principle that applied force can reduce the energy requirement of conformational transition or compensates for the energy spent during transition. Recent studies that tracked the mechanosensing ability of FAs suggest that protein tyrosine kinases (PTKs) could regulate force threshold for sensing by FAs [2],[3]and hence supports the protein switch theory. A third model which is independent of the hypothetical protein switch concept also exists. 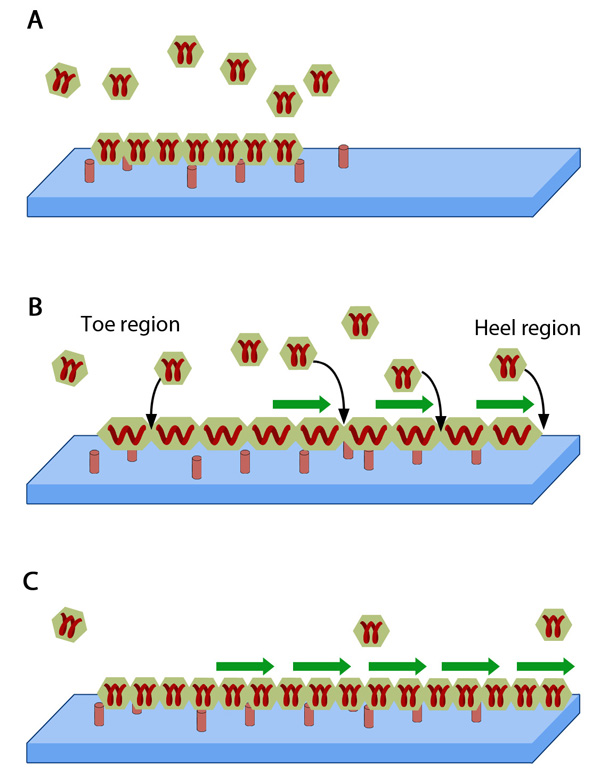 FAs are considered to be elastic, made of smaller units represented by the hexagonal building blocks that act like short springs. A. These blocks consisting of FA components are scattered outside the adhesion structure and when added to FA, they attach to the ECM (blue slab) through peg-like structures on the cell surface i.e., receptors. B. When FA is pulled by forces from actomyosin contractions (green arrows), the constituent aggregates get stretched and tension prevails. C. This drives the self-assembly at points of force application by insertion of new aggregates leading to energy relaxation. Adapted from [16930976, 19598236].

1. Stress-driven mechanism
Stress-driven model proposes that stress-sensing happens at the FA-actin bundle interface and most of the proteins that act as molecular switch, change to an active conformation when the stress they experience exceeds a critical value [4]. This model provides an explanation for matrix-rigidity dependent growth and maturation of FAs as well as the consequent ECM remodeling. Some mechanosensitive components that exhibit such force-dependent unfolding include integrins [5], talin [6], fibronectin [7], p130CAS [8], paxillin [3], FAK [9] and Src [10],[11].

A recently proposed model argues that the initiation of adhesion growth in early stages as well as growth and decay of mature adhesions are ECM-stiffness-dependent, resulting from the inherent molecular properties of mechanosensitive adhesion components [12]. The two molecular characteristics that are suggested to provide a force balance mediating these events are force-dependent state transition and strain-dependent surface binding. Hence, the stiffer the substrate higher is the probability of adhesion maturation. However, the role of mechanical force in structural transitions for most of these proteins are based on assumptions.

2. Strain-driven mechanism
In this model, FAs are envisioned as two-layered structures, where the lower integrin-containing layer interacts with the substrate and is mechanosensitive. When the upper layer is subjected to force due actin dynamics, a local strain is experienced on the top of mechanosensitive layer at the front edge of the cell [13]. This compression activates the elastic plaque proteins in the lower layer, increases their affinity and triggers anisotropic growth of focal adhesions in the direction of pulling force [14],[15].

3. Thermodynamic model
This model is based on the thermodynamic principles that stretching the focal adhesions decreases the chemical potential of any given protein within the plaque [16]. According to this model, FA is elastic in nature and stretching in the direction parallel to plasma membrane happens due to contractile forces of the attached stress fibers. Thus reduction in chemical potential acts as a trigger to promote addition of new plaque components from the cytoplasm in the direction of pulling and dispersal occurs on force reduction (reviewed in [1], see figure below). Work done in later years also support this theory of differential dynamics at the proximal and distal ends [91] and implicate actin bundling proportional and parallel in direction to force application as a means of substrate elasticity sensing [17]. They propose that the high tension exerted by attached stress fibers can cause active exchange of plaque proteins at the stress fiber-proximal portion of the FA, termed “heel”. Whereas at the distal “toe” region, minimal tension (threshold) prevails and thus the exchange rate is just sufficient to retain the components in place (reviewed in [18]).