How is Energy Transferred Across the Cellular System?

Cellular systems function at a nanometer level and use a highly dynamic set of components. Both of these factors act as primary constraints that prevent the generation of momentum within the cell. Energy is therefore introduced into the system by high energy ligands, such as ATP and GTP (adenosine and guanosine triphosphate, respectively). The effect of energy transfer, across a cellular system, on molecular processes follows the two principles below: 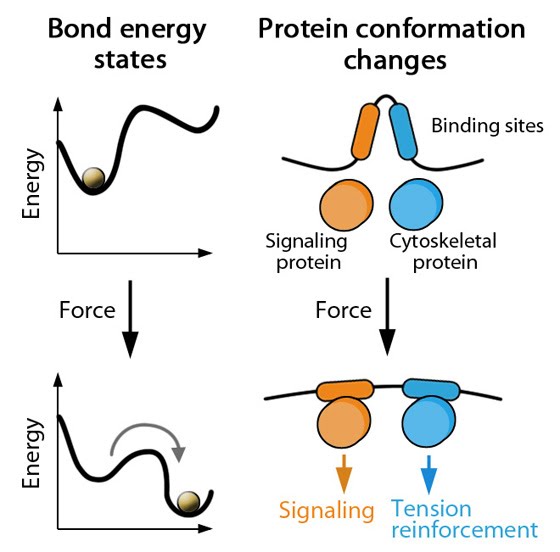 1) Energy is harnessed by capturing conformational states
The assembly and activity of functional modules (i.e. protein complexes) requires ligand hydrolysis. The resultant energy introduced into these modules can be stored in particular conformations of proteins in a complex and can be later used to drive reactions and/or transfer energy onto other molecules by change of conformations.

2) Molecular dynamics are regulated by force sensing
When in a complex, a protein has bonds that mediate protein-protein interactions as well as those that maintain its own conformation. Upon force application, the dissociation of bonds between proteins in the complex competes with the dissociation of bonds within the protein, with the latter instance being favored as this allows the complex as a whole to maintain tension. This has been demonstrated using actin, filamin and a-actinin [1].

A change in conformation can be explained as a transition between two energy minima that are separated by a high energy state that slows down the transition [2]. Applied force favors this transition by lowering the energy requirement and altering the energy minima i.e. stabilizing the new conformation [3] (see figure below). Thus conformational changes are therefore dependent on force sensing, in terms of both the magnitude and duration of the detected force [4],[5]. The conformational changes pass the signal onto neighboring molecules by exposing catalytic sites for initiating reactions and binding sites for signaling and/or cytoskeletal components.

With increase in load, cytoskeletal and cell adhesion structures initially display catch bond behavior, where bond lifetime increases until a threshold is reached when subsequent load then results in slip bond behavior i.e. reduction of lifetime leading to bond dissociation [6].