What are some common themes in mechanobiology?

Mechanobiology describes the relationship between a cell and its environment; how a cell can detect, measure and respond to the rigidity of its substrate and how these processes apply to larger biological systems. As the field of mechanobiology developed, several common themes applicable to various cell types and biological systems were described.

Cells Modulate their Stiffness According to their Substrate 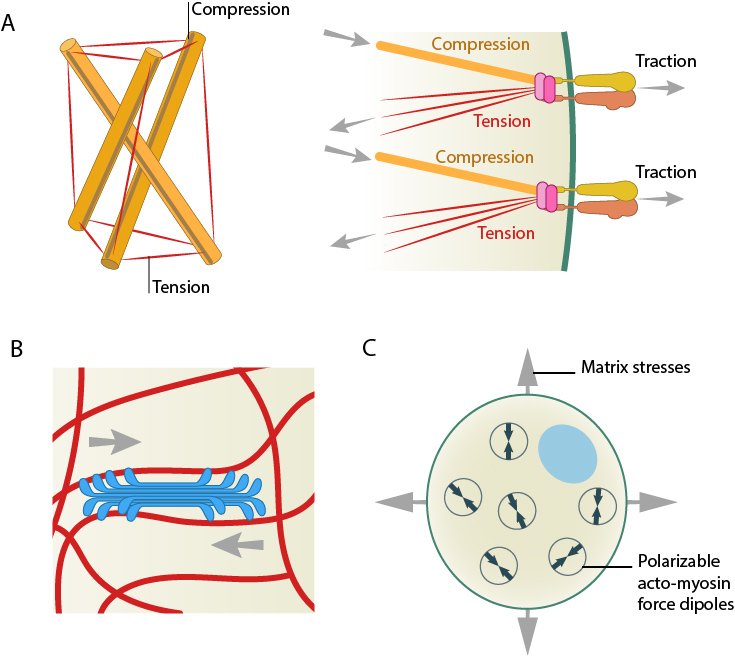 A key process in maintaining the balance of forces between a cell and its surroundings, is the ability of the cell to modulate its stiffness. This determines the elastic nature of the cytoskeleton and so in turn affects a diverse range of cellular processes [1]. Currently three models have been widely proposed for the regulation of cytoskeletal stiffness by force:

i) Tensegrity: This model states that pre-existing tension within the architecture of both the cytoskeleton and the extracellular matrix (ECM) determines cytoskeletal rigidity upon the application of load (stress), such that stress is proportional to rigidity. This model assumes the cytoskeleton acts as a network of tensed cables interspersed by soft cellular material [2],[3],[4]. These cables tense and pull in response to an applied force in order to regain cellular stability.

ii) Semiflexible chain: On the assumption that actomyosin filaments are distributed uniformly throughout the cell, this model states that the filaments are non-linearly elastic (similar to cytosol) and stiffen under stress. Hence, actomyosin filaments can be defined as semi-flexible structures, which are suggested to respond to force isotropically i.e. uniformly throughout their structure irrespective of the directionality of the force applied [5],[6],[7].

iii) Dipole polarization: On the assumption that actomyosin filaments are distributed uniformly throughout the cell, this model states that upon the application of force, the elastic filaments form dipoles. These dipoles propogate force through the cytoskeletal network through polarization and subsequent pulling on the filaments in direction-dependent manner. Hence, actomyosin filaments are suggested to respond to force anisotropically i.e. differentially throughout their structure dependent on the direction of the force applied [7],[8],[9].