How is the nucleus coupled to the cytoskeleton?

Cytoskeletal filaments bridge the nucleus to the plasma membrane, which in turn is anchored at sub-cellular sites to extracellular substrates via a plethora of proteins that form focal adhesions (FAs). FAs are points of cross-talk between transmembrane integrin receptors and the cytoplasmic filaments and thus are key sites for both biochemical and mechanotransduction pathways (reviewed in [1]). Linkage can be direct or via various adaptor proteins, providing structural support to both cellular and nuclear structures (reviewed in [2][3][4]) 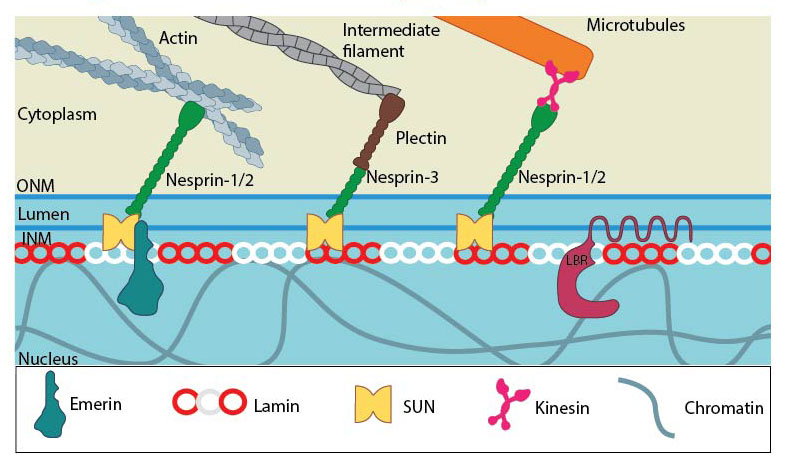 Actin cytoskeleton networks, as well as microtubules and intermediate filaments, converge on the nucleus, where they bind directly to KASH-domain proteins such as the nesprin proteins. These proteins emerge from the outer nuclear membrane and are part of a larger complex known as the Linker of Nucleoskeleton and Cytoskeleton (LINC) complex [5][6]; a physical link that enables force transmission from the cytoskeleton to cross the ~50nm nuclear enveleope and impact processes within the nucleus. Such transduction is possible as nesprin proteins are connected to the inner nuclear membrane through dimers of the SUN-domain adaptor proteins (Sad1p, UNC-84). These SUN proteins are in turn anchored to nuclear lamins, and chromatin, inside the nucleus[7]. The localization of KASH domain proteins like nesprin is affected by the depletion of SUNs, as well as nuclear lamins[8][9][10].

These links are emerging to be pivotal in various physiological processes including cell migration, and in the ability for cells to cope with mechanical stress [11][12]. Defects in the complex have serious consequences to nuclear mechanotransduction [13][14]. For example, when the LINC complex in fibroblasts was disrupted by inducing the mislocalization of nesprin-3, aletered gene expression profiles occured, with different sets of genes being over or under expressed depending no whether cells were grown on soft or stiff substrates [15].

Work by Mazumder et al. ascertained the active involvement of cytoskeletal forces in determining nuclear morphology. Change in nuclear size upon perturbation of actomyosin and microtubules affirmed their roles in exerting tensile and compressive forces respectively on the nucleus, correlating with their functions in the cellular context [16] [17], [18]. Further evidence confirming forces are transmitted to the nucleus from focal adhesions has been demonstrated using fibroblasts plated on microfabricated pillar arrays. Here, traction forces, which were measured by pillar deflection, were positively or negatively, correlated to heterochromatin movement inside the nucleus. In this case deflection of the pillars beneath the leading edge were negatively correlated, whereas those at the trailing edge, and hence in closer proximity to the nucleus, were positively correlated. In this case it was suggested that force propagation occured via an elastic or contractile component of the actin cytoskeleton [19]

Furthermore, the ‘perinuclear cap’, which is composed of contractile actin bundles that bridge focal adhesions on either side of the nucleus, has been shown to tightly regulate the nuclear geometry [20]. These bundles pass apically to form a dome covering the top of the nucleus and are connected to the nucleus through the LINC complexes. They are completely absent in pluripotent cells whereas during differentiation, their formation accompanies expression and assembly of lamin A/C as well as the LINC complexes on the nuclear envelope [21]. As a result, the nuclear height and shape are under their control, suggesting a role in mediating mechanosensitive processes such as motility and polarization [22].

Besides nuclear morphology, cytoplasmic forces also govern nuclear positioning in the cell by regulating the translational and rotational dynamics [23][24]. Positioning is accomplished by the physical connection by nuclear envelope proteins SUN-KASH-lma1 between centromeric heterochromatin regions and the microtubule network [25]. With the centromere providing tensional force on the microtubules that undergo dynamic instability, dynein motors mediate the rotation [26][27]. Actin links via SUN-nesprin are implicated in force transduction for nuclear movement during cell migration [28]. Regulation of nuclear position and orientation is critical in many cellular processes such as migration, cell division, polarization, fertilization and differentiation [24][26].