What is the nucleoskeleton?

The nucleoskeleton is a complex network comprising several mechanical structures that provide structural integrity and stability to the nucleus. They form an elastic shell at the nuclear periphery and scaffolds for localized stiffness in the viscoelastic interior; both of which are thought to serve as platforms for different genome functions (reviewed in [1][2]). However, the underlying mechanisms are not well understood. 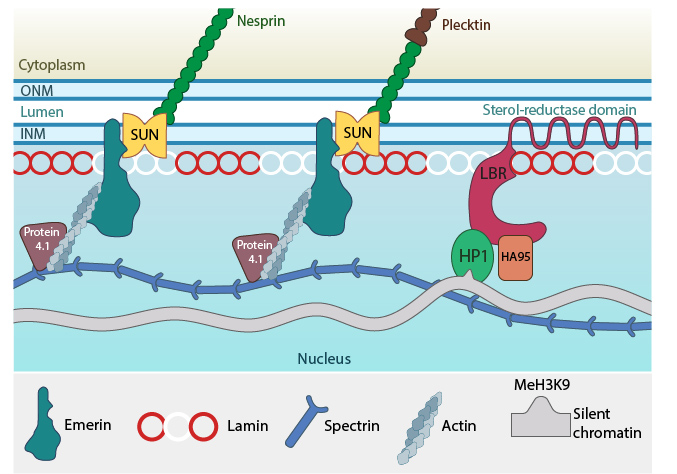 The nuclear lamina and associated proteins provide structural integrity to the nucleus. While the lamina confers stiffness in particular, the accessory structural proteins are responsible for other mechanical properties such as resilience. Emerin connects lamins, LINC complexes and the other nucleoskeletal components at the nuclear interior. Spectrin is involved in organizing the lamins and hence provide overall integrity. This is also aided by protein 4.1 and small actin filaments that act as mechanical struts to support the links. Adapted from [21321324, 15688064].

The nucleoskeleton imparts mechanical stability to the nucleus

At the nuclear envelope, lamins A/lamins C form a meshwork of interconnected rods manifesting stiffness to the otherwise floppy nucleus [3] [4][5] while in the interior they are involved in the DNA processing that include transcription control during G1-S phase transition of cell cycle and chromatin remodeling during replication [6] (reviewed in [7][8]). B-type lamins play fundamental roles in transcription and cellular signaling during processes such as cell migration [9][10][11].

The nuclear lamina, which is a region that lies between the inner nuclear membrane and the peripheral chromatin, is composed of a compressed lamin layer along with an array of adaptor proteins (reviewed in [8][12]). These proteins include emerin, MAN-1, HP-1 (Heterochromatin binding protein) and ]LAP2 (Lamin associated peptide) (reviewed in [13]). They stabilize the membrane-protein interactions and have several other binding partners, implying a role in mechanosignaling [14]. The average elastic modulus of the nuclear lamina is measured as 25mN/m in Xenopus oocyte nuclei suggesting its potential as a molecular shock absorber [15]. Besides this, the lamina also associates with heterochromatin and several transcriptional repressors, indicative of its role in epigenetic control at the nuclear periphery as well (reviewed in [16][17]).

In addition, accessory structural proteins such as titin and spectrin aid in organizing lamins. They provide resilience to stretch by simultaneously binding lamins, chromatin and adaptor proteins to form stable multi-protein complexes [18] (reviewed in [19]). Spectrin is also implicated in DNA repair mechanisms [20].

Nuclear actin, which is believed to support the overall nucleoskeleton by stabilizing protein complexes, is made of very short filaments that bind emerin at the envelope [21]. These are also seen in the nuclear interior and implicated in chromatin remodeling as well as dynamics of mRNA (reviewed in [22]).