Uncoating is the process by which clathrin is removed from clathrin-coated vesicles (CCVs). In mammals, this ATP dependent process is driven by the 70kDa molecular chaperone ‘Heat shock cognate protein’

Although the exact mechanics of clathrin disassembly remain unclear, it has been established that for every clathrin triskelion removed from the vesicle coat, a single auxilin molecule is required. Although studies have shown that more auxilin can bind to the clathrin coat [1][2], it is clear that only one is required for optimal disassembly [3]. In contrast, three Hsc70 proteins are required to carry out the disassembly of a single clathrin triskelion and it has been shown in vitro that reducing the concentration of Hsc70:ATP stalls the reaction before its completion. Addition of more Hsc70:ATP allows disassembly to resume [3]. Each of the three Hsc70 proteins is powered by the hydrolysis of ATP and therefore three ATP molecules are required for the disassembly of a single clathrin triskelion from the cage [4][5]. 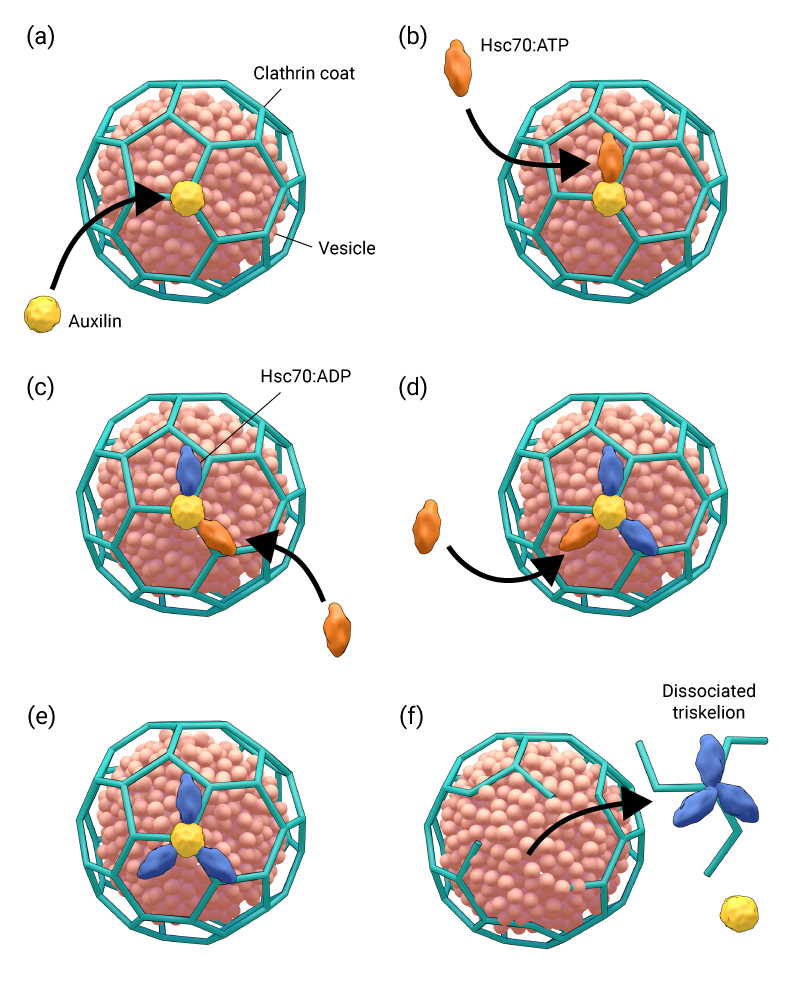 (a) Auxilin molecule binds to the clathrin coat, (b) Hsc70:ATP complex binds to the clathrin and auxilin complex, (c) ATP hydrolysis causes Hsc70’s affinity for clathrin to increase, and another Hsc70:ATP is recruited, (d-e) ATP hydrolysis causes the second HSc70 to bind to clathrin, and a third Hsc70:ATP is recruited, which is subsequently hydrolysed (f) Hsc:ADP complex has a higher affinity for the dissociated triskelion, and low affinity for auxilin, which is released and recycled (http://www.pnas.org.libproxy1.nus.edu.sg/content/108/17/6927.long)

In vitro biochemical studies suggest that the uncoating reaction is sensitive to pH, with efficient recruitment and binding of the chaperones occurring at pH6.0 and Hsc70 mediated dissocation of the clathrin triskelion occurring at pH7.0. At pH6.0 it was found that despite the ATPase activity of Hsc70 continuing, it was unable to disassemble the clathrin coat [5]

The rate of disassembly ranges substantially depending on the parameters of the experiments performed in its assessment. Measured in half-life (t½), studies using centrifugation-based experiments, which incorporate the adaptor proteins, report a slow disassembly of between 2 to 10 minutes [4][6][7]. Experiments that measure light scattering report much faster disassembly rates of approximately 10 seconds [3]. These differences have been attributed to the stabilization each adaptor protein confers to the clathrin cage [3]. Furthermore, additional in vitro experiments have shown that the time course of uncoating is non-linear and biphasic. Phase one involves a rapid burst of uncoating, followed by a second, slower phase of steady-state uncoating [8][4]. A low ATP hydolysis rate is observed when ATP is bound in complex with Hsc70 and this has been suggested to govern the rate of uncoating following the initial burst of activity in phase one which subsequently limits the amount of disassembly that can follow [4].