Macropinocytosis or ‘cell drinking’ is a type of endocytosis that involves the nonspecific uptake of extracellular material, such as soluble molecules, nutrients, and antigens. First observed in 1931 by Warren Lewis while working on rat macrophages, macropinocytosis was described as the inward folding by some of the cell surface ruffles to fuse with the basal membrane, forming vesicular structures called macropinosomes. The macropinosomes are large, uncoated vesicles that greatly vary in size, with their diameters ranging between 0.2 and 5 micrometers [1][2].

Mechanism of macropinocytosis: an overview 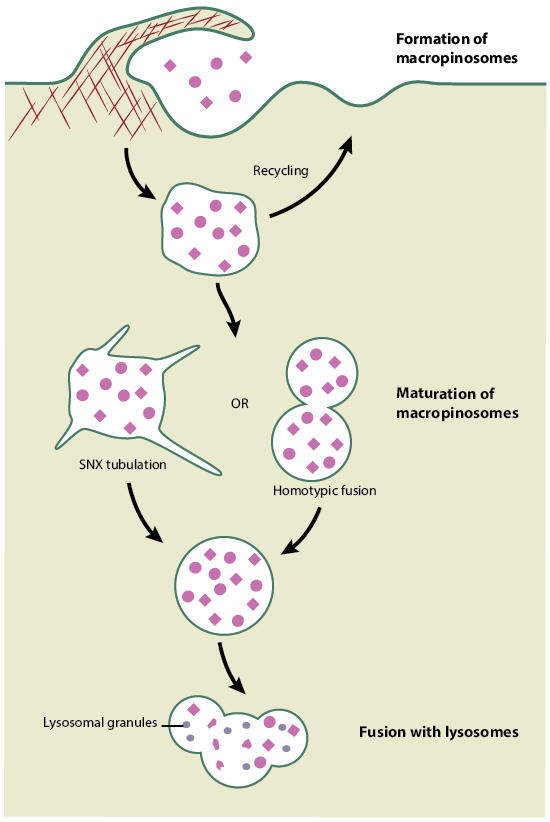 Macropinosome formation: The formation of macropinosomes is an actin-dependent process that is initiated upon stimulation by a growth factor such as colony stimulating factor (CSF-1), epidermal growth factor (EGF), or platelet-derived growth factor (PDGF) [3]. Signal-induced receptor activation leads to an increase in actin filament polymerization at the cell membrane, which increasingly pushes the membrane forward into ruffles. While most of the lamellipodia-induced ruffles retract back into the membrane, some of them fold inwards and fuse with the basal membrane to form large membrane vesicles called macropinosomes, within which a large volume of extracellular fluid gets encapsulated.

While most cells can form macropinosomes in response to an external signal such as a growth factor, macrophages and dendritic cells use constitutive macropinocytosis to survey the extracellular fluid for the presence of antigens. Contradictorily, certain viruses and bacteria exploit macropinocytosis to enter host cells and spread infection. The physiological relevance of macropinocytosis can be discussed in terms of the cellular processes that they are involved in:

The formation of macropinosomes involves actin-based deformation and remodeling of the cell membrane and is regulated by mechanical stimuli that cells are exposed to. In order to study the mechano-regulation of macropinocytosis, Davies et al performed in vitro tests by exposing bovine endothelial cells to steady shear stresses varying in amplitude between 0 and 15 dyn/cm2 and found that the rate and nature of pinocytotic vesicle formation was influenced by changes in shear stress. More importantly, the study showed that slower periodicity shear changes, such as those leading to vascular changes at arterial branch points, were vital for upregulating pinocytotic rates, as opposed to rapid shear changes, such as those produced during systolic and diastolic changes, that had no influence on pinocytosis [15]. Recent studies have focused on optimizing macropinocytic uptake of nanoparticles for therapeutic and diagnostic purposes. One such approach using human umbilical vein endothelial cells (HUVECs) has shown how varying shear stress rates alters the formation of membrane ruffles and how this is critical for ruffle-mediated endocytosis of nanoparticles [16]. On the other hand, nanoparticle shape and size, charge, or material composition can determine whether the cell uses macropinocytosis, caveolae- or clathrin-mediated endocytic pathway [17].