What is Rho-dependent IL-2 receptor endocytosis?

Internalization of transmembrane receptors was thought to occur exclusively via clathrin-mediated endocytosis (CME). However, the discovery of clathrin-independent endocytic routes, in particular, the pathway that mediates the internalization of the cytokine receptor interleukin-2 (IL-2R), raises into question the interchangeable use of the term ‘receptor-mediated endocytosis’ as a synonym for CME [1]. It has been proposed that the specific endocytic mechanism is used to describe the pathway. 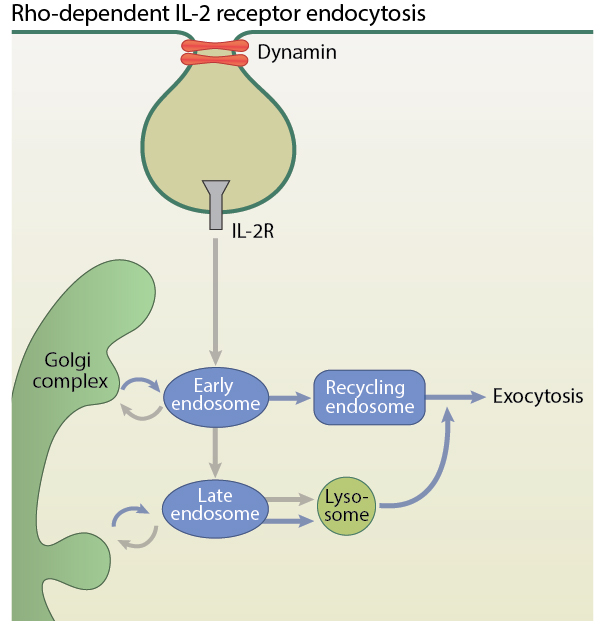 A clathrin-independent pathway dependent on RhoA and regulated by PI3K

The endocytosis of the cytokine receptor IL-2R, occurs via a constitutive, clathrin and caveolae-independent, dynamin-dependent route. This pathway is dependent on the Rho small GTPase RhoA [2] and is regulated by the lipid kinase, phosphoinositide 3-kinase (PI3K) [3]. The current model for IL2-R endocytosis is as follows: 1) IL-2R activates PI3K by interacting with its regulatory p85 subunit, leading to the production of PIP3 at the membrane 2) PIP3 induces Vav2, a guanine nucleotide exchange factor (GEF) for Rac1, that activates Rac1 3) Rac1-GTP directly binds to p85 and thus is recruited to sites containing IL2-R 4) This activates the downstream target of Rac1, the p21-activated kinase1 (Pak1), which phosphorylates cortactin, promoting its association with neuronal Wiskott-Aldrich syndrome proteins (N-WASP), activating actin polymerization. [4], [5] [3] [6].